What Writers Want (apart from money and coffee)

There's not been a blog all year. And here’s the main reason I’ve been quiet: I’ve been reading scripts.

Loads of them. Hundreds. Thousands! Actually, not thousands. But nearly a thousand.

We ran a competition on the Sitcom Geeks podcast in conjunction with Hat Trick Productions and we received 887 entries. That's 887 pilot sitcom scripts. The winner should be announced soon.

So what did I learn reading hundreds of pilot sitcom scripts?

It has been very revealing to read what newer writers are interested in writing about, and how they go about it. And I have to be honest. It’s been very frustrating. Why?

The vast majority of scripts are making basic mistakes so that by the time I’ve read to page ten, I’ve made up my mind to move on to the next script. And it's painful when I know how much work has gone into the script I'm reading.

So here's the big question:

How can you avoid making those mistakes?

I plan to spend the rest of this year telling you on this blog and on YouTube. They will be dropping regularly throughout the year. So look out for those. If you want to be kept informed of all that stuff, join The Situation Room mailing list for free. Straight away you'll get access to some videos and webinars that aren't on YouTube. Including videos on Creating Sitcom Characters, Plotting Your Sitcom and 13 Rules of Sitcom.

But you'll have also found out about this Webinar I'm running on Friday March 4th called 14 Problems with your Sitcom Script. And I'm doing it because I think I know what writers really want:

What Writers Want (apart from money and coffee)

Here’s what: notes. Feedback! If not unalloyed praise, then at least constructive criticism. Writers want some indication of where they are going wrong in their scripts so they can improve.

In the case of the competition, we’re unable to give feedback on every script. There are just too many. So, heads up. In a month or so, I’m going to be announcing a Supercharged Script Reading Service.

But in advance of that, and at a much lower price, I’m releasing a resource called 14 Problems With Your Sitcom Script. It’s a 50+ page script diagnosis, explaining how most pilot sitcom scripts are going wrong and, crucially, how to remedy these avoidable problems.

And I’m hosting a webinar for that at 6pm-7.30pm on Friday 4th March on Zoom when I will run through the 14 Problems most common in the sitcom scripts I read.

Which will apply to yours? Do come and find out. There’ll also be lots of chances to ask me questions.

That is very soon, so book your place now.​

There is a small charge for that webinar (£17.99). These resources take a lot of time to get written, and get right – but the webinar will include a free copy of the PDF (which will cost £27 from Sat 5th March onwards so worth signing up just for that early bird price). 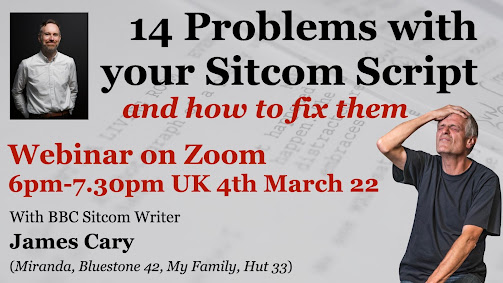