5 Ways To Get Your Characters Talking

Developing characters is really difficult. It's easy enough in theory. You could start with contrasting personality types, drawn from a Meyers-Briggs chart, or by bootlegging a Shakespeare play and plonking them in 2017. But so much of what a character is - or could be - comes from how they talk. I've written a bit about this before here.

It would be very easy to carefully plot and plan an entire pilot episode of a brand new sitcom, and immediately hit the buffers because you just don't know how the characters sound.

First scenes are really hard to write as it is. First episodes are even harder. First episodes of shows that don't even exist yet are the hardest of all. So you need to do everything you can in order to make your life as easy as possible. Here are some tips to prime the pump.

Let's say we've got an optimistic young mum character called Ruth. In the first scene, she's at a check-out of a supermarket. Baby in trolley. Let's try and write that. 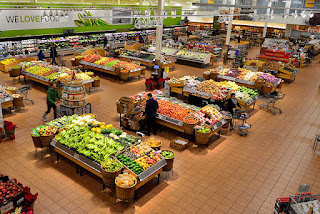 Nothing's occurred to me as I write those lines of action. And I'm not excited about it as the scene sound pretty negative and charmless. What's the joke? Who is Ruth? How does she talk? How can she talk in a way that is truthful to her character as well as funny? In short, think about your character from all angles. Interrogate them - and listen. Eventually, they'll start talking.

1. What's Your Name And Where Do you Come From?
Firstly, you need to know roughly whether the character is from. Where is the show set? Are we in Birmingham? Are they from that part of the world, or were they brought up elsewhere? Do they belong there? Did this young mum move from Leeds? Or Edinburgh? To be with someone, and it's all gone wrong, and now she's raising a child alone? That will affect they way she talks. She can still be an optimist - but Ruth's situation will make her sound a bit more desperate. Or in denial. Or super-determined to make a go of it.

2. Where Do You Think You're Going?
Backstory is normally toxic to pilot episodes. I've written on this before. Think, where is the character going? What do they want? Is she determined to set up her own business? Or under-estimate how much time and energy a baby will need? This, again, will inform the way she speaks. Suddenly, she's not just a character in the moment buying groceries. She's got a past, and more importantly, a future. In her head, at least. We don't want to hear the details - and the neither does the cashier she is buying the groceries from. But she does at least have an attitude which should make her easier to write.

3. Is it Someone You Know?
It may be this character isn't just dreamed up out of your head -  although it is in my case as I just plucked an example from the air because this is blog. Maybe this is your sister, or your cousin. Or your best friend. Or a teacher you knew at school. How would they talk in this situation? Channel that. Use it.

4. Who Would Your Dream Cast Be?
You could think about who is likely to play this part - most likely someone from another sitcom already on TV. Or a drama or soap. That might give you a clear sense of how they talk. It might be hard to make your character distinctive from that other sitcom. So you could think of some super A-Lister from Hollywood and imagine how they'd play the part. What if this character were played by Reese Witherspoon? (who is 41, but that's Hollywood 41, so 30-something to normal people). Same goes for Amy Poehler, but pick someone, and that might help at least with the sensibility of the character.

5. Have You Seasoned Your Outline?
When writing your outline for you pilot script, drop in lines and bits of dialogue as they occur to you. Sometimes a line crystallises very early on and becomes pivotal. There was one character in my first sitcom on BBC Radio 4 I wrote called Think The Unthinkable. At one point, in an early brainstormed outline, in response to being asked to think of solutions to get more people cycling in London, he said, without joking, "Could we get London to be mostly downhill?" It was a key line for the character because it said everything about him. A free-thinking idiot. In the end, that line was used in the final episode of the first series.

Any lines you can drop into your outline are really helpful. If none occur to you as you're writing the outline, maybe you just don't know the character well enough to start writing

With that in mind, let's have another crack at that opening scene with Ruth, our single mum optimist with shades of Reese Witherspoon, Amy Poehler and one of my sisters (I won't say which). And why should the check-out person be female. Let's make it a young man. Might be fun. Here we go.

Scene 1. Int. Supemarket. Day. 10.00am
RUTH is purposefully piling groceries onto the conveyor belt. HARRY, the baby (c. 9 months old) is in the trolley seat. The cashier, KYLE, is about to start running the items through till.

RUTH
Yes. Dairy in the blue bag. Veg in the green.

RUTH pulls out a long shopping list and examines it closely.

KYLE
Excuse me, but I have a right to do my job without harassment-

RUTH
What? No, cotton balls! For Harry.

RUTH points at the baby and gestures bottom wiping. RUTH grabs some carrot batons in a bag open opens them. She hands them to KYLE.

KYLE
Erm, no thanks.

RUTH
They're not for you! If he screams give him a baton. I'll be back in a minute.

Okay, it's not hilarious. But it's a start. Ruth already seems funnier and more motivated. Try your own version. Hope that helps.
In fact, may I help you a bit more? 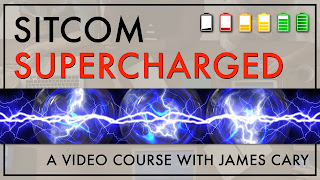