Plotting is hard. Stories rarely come to mind fully formed. There’s normally a starting point, or a snapshot, or a moment that feels like it would be funny, or interesting or fruitful. The hard part comes when you have to turn that into a plot for your sitcom episode.

I’ve written about this in the past, saying how important it is to give your characters hell. Let rip! This has never been more important than the current climate when drama is killing comedy in the ratings. Your comedy protagonist is on the same box that gave the public Jack Bauer, President Bartlett and Walter White. Sometimes we don’t let our imagination run wild and cause utter calamity for our characters because we’re worried we won’t be able to plot our way out of it. We need to take off these shackles.

The Protagonist is not just hero, or the one we’re rooting for, or the dolt we feel sorry for. He/she doesn’t just try and fail like Sisyphus pushing a boulder up a hill day after day. In each episode, the protagonist is the agent of change. In short, they need to keep making it worse at every turn. Worse for themselves. Worse for their friends. Better/worse for their foes. Worse.

It’s tempting to give your character a quest – and see them fail once, then fail again, learn a lesson and through a third failure, somehow succeed. Nice and easy. Or they have to go on a wild goose chase, or get the runaround. But it’s probably not be very interesting or satisfying. Chuck Wendig is brilliant on this here.

Take some characters I created in a previous blog post. Geoff and Lynette. Geoff is a technophile and a tinkerer. Let’s say he wants to prove his manliness to Lynette and that he’s not a useless old git by, say, fixing the waste disposal unit. How’s he going to do that? A waste disposal a dangerous thing that might take his arm off. That’s good (for comedy). He tries to fix it one way. And then another. At this point, I’m already thinking that a waste disposal might not be right because we’re never going to see the thing take his arm off. Maybe it’ll be fine. Can’t tell at this stage.

Either way, after a couple of scenes, he hasn’t fixed the waste disposal, at which point, we’re screaming at the TV that he should just get a handyman or plumber in to fix it. Maybe he does – and then has to pass off that his was his handiwork. Or Lynette comes home early and the plumber has to hide in a cupboard.

It could be funny that Geoff is hiding a fit, virile young handyman in his cupboard and it looks like they’re having a torrid love affair, which might have been hinted at in jest earlier and now looks like it might be real. But this plot feels very linear. It’s just a series of events that may in themselves be funny set-pieces but are less then the sum total of the parts.

And not only does Geoff needs to make it worse. The reasons for the actions leading to that catastrophe need to be based in character, rather than just bad luck, or clumsiness. Story is character if we're going to be all McKee about this.

So let’s remind ourselves about who Geoff is:

Geoff is a good hearted optimist, always trying to make things better for the people around him. And would probably like to be recognised for doing so. He’s a gadget guy, and thinks gadgets can improve everything. And he never throws anything away in case it comes in handy. This is all a function of his optimism.

How will this affect his fixing of a waste disposal unit? For a start he will believe that he can do it. And he will have the tools to fix it. Somewhere. And he will have the original instructions. Somewhere. So when Lynette goes off on a trip suggesting Geoff call a plumber, Geoff can be confident that he can do the job before Lynette gets back late that evening, at which point, she says she will call a plumber if he hasn’t fixed it.

So Geoff will spend ages finding the tools and the instructions. Because he's a hoarder. And then not find them but get distracted by other junk. Because he's a tinkerer.

Then he’ll be in a hurry to fix the waste disposal to get it done before Lynette gets back, and in so doing disconnects a pipe with sends water splurging all over the kitchen, perhaps onto an important irreplaceable document that Lynette has left out for him to sign? (We'd need to seed that earlier and imbue that piece of paper with great significance) In trying to dry out this document, he uses too much heat and fuses the electrics, plunging himself into slippery darkness.

He slips in the darkness (don’t let the darkness last long as we can’t film it!) and somehow there’s an emergency light – or the light from the oven he can just reach. Maybe there’s a panic button Geoff has always been too proud to use because he doesn’t consider himself to be elderly (because he isn’t). Lynette comes home to find calamity. Or Geoff passed out in front of an open oven, and it looks he's tried to gas himself?

This is the kind of process I would go through in trying to work out the plot. It still feels a bit linear, but it’s all just a first stab at what could happen, without a very satisfactory resolution yet. It’s a quest for Geoff that gets harder and harder as he makes bad decisions because of his character.

I’m dubious about some of the later stuff because it’s funny physical comedy, but not quite coming from character. It seems there needs to be more justification for it – but this is blog and I’m not being paid to sort this out, so I’m going to leave that there for now. But I could easily spend a whole day – several hours – going through the possibilities, talking it through with my writing partner and refining it. And even then, we might leave it on the drawing board, or realise the whole thing is flawed for some reason we could see early on. 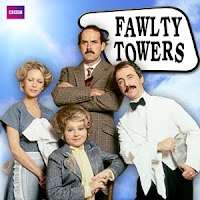 I like Fawlty Towers, although not as much as some, but I suspect that Cleese and Booth did this brilliantly in their plotting, as they would heap calamity onto catastrophe, all coming from Fawlty's snobbery, ego and cowardice. For homework, it might be worth watching one or two episodes to see how they did it. And if you show is a tenth as successful as Fawlty Towers, you'll be doing very well indeed.

Hope that helps with your plotting. It takes ages. And you need to ask more than the question which is ‘What goes wrong?” You need to ask “How does my character make it worse."

"Because of who they are.”

Getting Your Story Straight

If you want to build your own sitcom, you really need to get the story right and know what the show is about. That is emphasis of my sitcom video course, Writing Your Sitcom. Spec scripts are almost always deficient in the storytelling, and if you can get that right, your script really will stand out from the huge pile of other scripts. Why not find out more about the course here?