A recent Twitter exchange prompted me to share a thought about the sitcom industry. It may well apply to shows other than sitcoms, but that's outside my field of expertise.

Here's the thought, posed as a question:

Does it actually make any difference whether people turn up in great numbers to watch your TV show, or doesn't it? In terms of getting a second series. 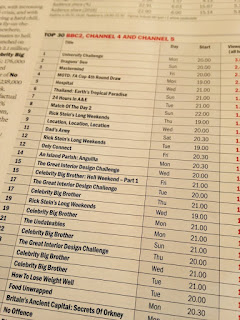 These days, you get a blizzard of numbers about your show. There are the 'Overnights' which measure roughly how many people watched it live, with various segments within that. Then there are the 'Consolidated Figures' which add on catch-up TV over a specific period. And various blends of the number in-between over longer and shorter periods with different demographics. But do these numbers matter?

Ratings do matter. A bit. But no way near as much as you'd think.

I'm sure some TV commissioners and controllers would disagree and would like to think they apply the same criteria to measure each show's success and failure. But they don't, and there's no real reason why they should other than being seen to be scrupulously fair. But fairness is somewhat overrated, especially in the brutally competitive world of television.

How have I reached my conclusion? Because there are plenty of shows written by plenty of writers, some of whom I know personally, that drew a certain number of eyeballs - and were cancelled, because that number was not deemed to be high enough. And other shows which started with modest/dismal numbers and continued with said numbers for two, three or more largely unwatched series.

Because there's more to a show than the numbers. There's brand management of the channel - both to the viewing public and the industry. There's professional pride in the form of critical acclaim and awards. And there's the gut instinct or emotional investment of the commissioner or controller, who might see a show as 'their baby', or see another as an unloved orphan.

You easily get two scenarios different scenarios around roughly the same numbers.

Scenario 1
Producer: So are we getting a second series? The show averaged about 1 million viewers so it's not clear whether-
Commissioner: It is clear! It's a great show. I've always loved it. And I'm very proud of it. And this is exactly the kind of show we should be doing. And we should be backing talent. Let's do another series!
Producer: Great. (Leaves office. Pumps fist/does dance).
(Oh, BTW the writer is NEVER in meetings like this. Not in the UK anyway. Writers are just an embarrassment to the industry).

Scenario 2
Producer: So are we getting a second series? The show averaged about 1.1 million viewers so it's not clear whether-
Commissioner: Hmm. It's pretty clear to me. Sorry, but you're inheriting a good audience from Gardener's World and not keeping them. The slot average is 1.7 million, so I'm a bit disappointed to be honest.
Producer: I'm sure a second series could build on the-
Commissioner: I really don't think so. I mean, I love the show. If it were up to me, I'd recommission it.
Producer: Isn't it up to you?
Commissioner: Well, yes. Kind of. But it's complicated. Sorry, but I don't think that this show is coming back.
Producer: Fine. (Leaves office. Ponders on calling the writer, but decides to leave it 'til tomorrow.)

That stuff happens all the time. It's not a numbers game. There's much more too it than that. And that because there are a lot of issues at play. It's painful, and unnannoying, and our God-given insistence that everything is fair is frustrated. But life isn't fair. TV isn't fair. And if they don't like your show, or aren't invested in it, they ain't backing it.

This is all another reason why you should write for yourself - and not anyone else. Write what you think is funny, because whether the show gets on TV and stays on TV is completely out of your hands.