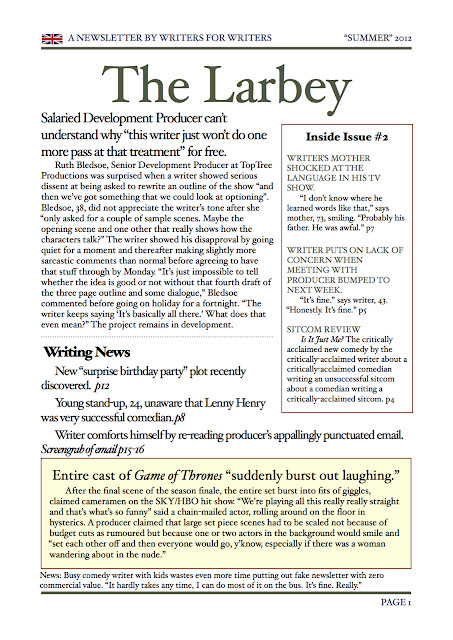 Voices In Your Head

In the last post, I wrote about the importance of story and structure and character in sitcom - and the dangers of rushing to write a script. Character development and storylining take ages, especially if you're doing it right, and cutting corners normally backfires. Winging it or joking your way of out trouble is tempting but hardly ever works.

But that is not to say that you shouldn't write any dialogue until you're done your fourth draft of a detailed scene by scene breakdown of the episode. If you can hear the characters talking, write it down.  Fast. Grab a napkin and a lipstick if you have to. But get it down. It's worth having.

I've been working on a new idea and will be writing a script very soon. I have the characters in place - although I've just merged two characters into one - and a rough idea for a story. But then, based on one line in my head, the main character had a conversation with her daughter in my mind and it sounded funny. So I frantically started getting it down before the voices in my head stopped. They were arguing about something and it escalated and it was funny. I wrote about three pages before it felt like I was ready to stop. That script fragment then helped me as I formulated the story.

A few days after that, I was swimming and thinking about the show. Another conversation started to take shape in my head. It was between the same two characters but felt like a conversation they'd have at the end of the show. It seemed like very useful dialogue and, rather than risk forgetting, I got out of the pool and typed out the conversation on my smartphone. It was about two pages of dialogue in note form. And when I got home, I typed it up.

I'm still working on the story. It's still not quite there, but it's coming. The third act B-Plot doesn't work yet, but the emotional beats of the story are in place and I've got some dialogue and characterful jokes for it. I may well end up ditching it, but it helps to have it, for morale if nothing else, and the characters are now talking to each other. Yes, I have voices in my head. And I'm very glad about that.
Posted by James Cary at 23:54 1 comment:

A link to some pearls of wisdom from Pixar has been doing the rounds on Twitter recently and we ignore these pearls at our peril. And yet, the ambitious young comedy writer might turn their snout up at these pearls. And I can understand why. After all, there’s nothing about comedy on that list – and it’s all about character, focus, story, feelings, yadda yadda yadda. So far, so Woody.
The frustration is the novice comedy writer often feels they want to get on with the jokes. Cut to the funny. It’s partly borne out of passion for comedy, which is admirable. It can also come from lack of confidence. Young writers, especially blokes, often shy away from character and story because they are more attracted to ideas and jokes. And so their characters can merely be vehicles for concepts and/or mouthpieces for clever wordplay. I remember this stage in my own career as a writer – and a very happy stage it was as I was writing sketches for stage (Infinite Number of Monkeys), radio (Concrete Cow) and TV (Smack the Pony). We've seen and loved sketch shows that revel in ideas and jokes, rather than characters. (eg. Big Train, Mr Show)
A Blend of Skills
The art of writing sitcoms requires all of the above skills – you need ideas and jokes - but also a bunch of other skills. It’s why it’s so hard. You need to be able to establish characters, tell a story that suits those characters and make it funny. All within 20-28 minutes. Ideally, it needs to be funny because it’s those characters in that story. The best jokes are often very small ones, but they mean so much because of the character and the situation.
Sketches are like pop songs. Three minute nuggets of catchy, carefully honed perfection. What’s not to like? The sitcom is the half-hour symphony with high and lows, repeating themes and a crescendo. It requires careful planning, hard work and, above all, confidence, to pull it off.
Scripts that lack confidence are easy to spot. They’re full of jokes, sometimes good ones, occasionally highly original ones, but you don’t really care. There’s not enough to keep you turning the pages. It’s what-I-call “people talking”. People with names trading lines, wise-cracks and insults.
Why People Watched Friends
The problem is that highly successful shows can look like they’re just people talking. Let’s take Friends. It was such an exciting show when it came out. But it remained exciting through its long run. How?
And at the start, everyone liked it straight off because of the jokes. Everyone’s favourite character was Chandler, because Chandler just was funny. He said funny things. The kind of things that comedy writers would say. That was his thing. Being funny. Nice trick. Phoebe too. She was crazy and said funny things. And Joey. He liked the ladies and was dumb as nuts. But the show wasn’t a huge multi-billion dollar long-running smash hit because of Chandler, Phoebe and Joey. It was because of Ross and Rachel. Their carefully paced and calibrated story kept people coming back for more and more.
Writing sitcoms is more than just joining up jokes. Yes, Graham Linehan is open about how he writes sitcom scripts, seeing funny set-piece scenes in his mind’s eye and working how to get from one to the next. But don’t do it his way even though he makes it work. Carla Lane, I’m told, didn’t used to plan her episodes of, say, Bread, in advance. Don’t do it her way either. She made it work. (In front of nearly 20 million people, let's not forget) It is unlikely any of us have the exact same skill set as Mr Linehan or Ms Lane. We need to do it like Pixar.
All of this is a long way of saying that sitcoms need characters and stories. You need to get those in place or your jokes just won’t count. A young comedy writer might think he can gag his way out of trouble. A more experienced hand my think the same. After all, who cares about the plot if it’s really funny. But thinking of better jokes won’t help any more than spending a week buffing up a Ford Cortina. At the end of the day, it’s just a Ford Cortina.
So, if you’ve got a good idea for a sitcom, or an episode, go through that Pixar list and ask yourself those difficult questions. Or get some help. Ask someone else who's strong on story and character to help you. In the long-run, it’ll make writing your show much easier.
And then when you're got your brilliant characters and carefully crafted plot, promise me one thing. That you'll write some jokes? Thank you.
Posted by James Cary at 22:20 3 comments: