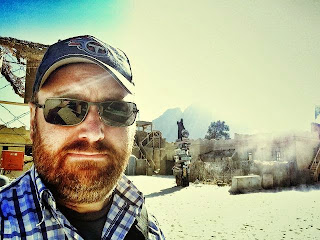 I've been a little quiet recently. The main reason is that we're shooting Series 3 of Bluestone 42 in South Africa. This usually affords hours of time for sitting around waiting for the lights to be reset. But at the start of shooting there's usually quite a lot of things that require your attention. And access to the internet is patchy, so updating blogs is not high on the list. Plus, one is reluctant to get out a laptop when dust is swirling around the place. Not convinced? Me neither. There will be some new blogs before long. And I have been writing stuff, but mostly material for a sitcomgeek book. (If you'd like to publish this book, please contact my agent.)

Anyway, the reason for this blog is to let you know that those real comedy geeks over at the British Comedy Guide a running another conference on Saturday 29th November 2014. I'm really glad that these guys are running comedy conferences because they just love comedy. And that comes through in everything they do.

The last conference was, by all accounts, great. I was here in South Africa, gadding about playing soldiers, so I missed it. And it's the same again this year. I'm even more annoyed I can't get along, as it looks utterly brilliant. They've got comedy royalty coming along in the form of Simon Nye, Andy Hamilton and Guy Jenkin. An hour spent in the room with those guys is time - and money - well spent. Worth the price of the ticket just for that. Then throw in the likes of Pete Sinclair, Mark Burton, Vicki Pepperdine, David Quantick and plenty besides and you've got a day of unalloyed comedy pleasure and insight. Oh, and I think they're about to announced some guy called Graham Linehan is coming too. Yeah. That guy.

I'll be honest. Maybe it's seems a little on the steep side being £169 for the day. But here are some mitigating circumstances: The day is long and packed. These things cost money. They also offer writers money to come and speak. Most conferences do not this, whilst charging even higher ticket prices. I hope we can all agree that writers, even ones that are doing okay, should he paid. Plus lunch and refreshments are thrown in. And, a free one-to-one session with a guru who might be able to give you a nudge in the right direction. And the British Comedy Guide guys aren't doing this for the money. As I say, they just love comedy. The conference is about comedy - and how you can make some, and learn from the real pros.

And here's the kicker: Use the code SGEEK when you book before 17th Nov and you'll get £20 off. So, all that for less that £150. I think that's money you will not regret spending. And I really and truly get nothing out of it. I just think it's a good thing. So go here.
Posted by James Cary at 14:38 No comments: