Via Twitter, Jake asked "Single cam vs multi cam, what works best for each format?" There's a short trite answer to this: Multi-cam works best for your career and your bank balance. This is very much a personal view, but allow me to explain.

Critics are always sneery and sniffy about multi-camera/studio sitcoms but TV Commissioners love them and are always looking to commission them because they know the audiences at home like them. Critics continue to be baffled and enraged by this but there's a possible reason for that - the sound of laughter cuts them out of the loop. It's hard to say 'That's simply not funny' when there's the sound of the audience falling about laughing, which is, I presume, why they often perpetuate the myth of 'canned'/fake laughter. Once a studio sitcom is deemed to be a runaway hit, some critics will begrudgingly accept it, as happened with Miranda which opened to very mixed reviews, but ended up being a 'guilty pleasure' (which just means 'pleasure', surely?).

Know Your Audience
Now, the problem with being an aspiring writer or writer/performer is succumbing to the temptation of trying to write something that will impress your peers, that might win awards and get good critical reception. The safest way to do that is to write a non-audience, single-cam show. Then if it turns out to be not that funny, your show can be defended by saying it's more of a comedy-drama, and much more about the characters, stories, etc etc - which is, of course, hooey. But the fact is that you can't pull this trick with an audience/studio sitcom. When a multi-camera show doesn't really work, it hurts, and you can't pass if off as serious or experimental theatre.

The result of this is Comedy Commissioners desks are piled high with non-audience/single-camera scripts. Do you want to spend months writing a script that is going to add to that vast pile, competing with the likes of Paul Whitehouse or Alan Davies for a half-hour slot on BBC2? You stand a much better chance of progressing with your script if you write something that can be filmed in a studio in front of an audience. I know this for a fact. (You chances go from 1 in 100,000 to 1 in 30,000)

Hopelessly Biased Advice
Now, I am biased, obviously. I'm an studio audience guy. I started out writing revue sketches for the stage, did Edinburgh shows and then did lots of radio in front of audience. Virtually everything I've ever written has been recorded in front of an audience. Every single episode of Think The Unthinkable, Hut 33, Concrete Cow, Miranda, Another Case of Milton Jones, My Hero and My Family have all been studio TV/Radio sitcoms.

One has to put up with dunderheaded reviews, of course, but I'm always glad to write for a studio audience because you have to make them laugh. Out loud. So the microphones can pick up the noise. So you have to write jokes. Lots and lots of them. I'd aim for four per page, if not more. And if you're writing those jokes and getting those laughs, you're most of the way there.

This is hard work. Incredibly hard work. Once you've plotted, outlined, written and rewritten your script, you have to go through it again and again being absolutely brutal about every single line, beat and comma. Every line has to be in character, and if it's not moving the story along it has to be a set-up to a joke, or a joke (again, all in character) so you get that regular laugh. Listen to how often the audience laugh on an episode of Friends. It's terrifyingly metronomic. But that's what you're aiming for. And the prospect of 250+ total strangers filing in to watch your show on a cold November evening gets your mind working and your fingers tapping your keyboard.

A single-camera show bypasses this. You don't have that terror driving you on to put jokes all over the place. The millions watching at home are miles and months away. That's why I'm always so impressed by genuinely hilarious non-audience shows (like Peep Show, The Inbetweeners and The Thick of It in UK and Arrested Development and Modern Family in US). They managed to make their shows so funny without that discipline of a studio audience. That takes slavish commitment.

The Roots of The Formats
Conversely, I'm rarely surprised when a single-camera show isn't very funny at all. But here we delve into an area that I think many of us haven't really considered - which is how single camera and studio sitcoms come from such different places.

Studio sitcoms are totally contrived - and the audience are always very happy with this contrivance. They are mostly indoors with the same characters every week. Stories tend to take place within a 48-72 hours time frame. There are set-pieces, sometimes verging on pantomime - and the studio audience and often the viewers at home are fine with it (9.5 million watched Miranda on Boxing Day). These sorts of shows, though, are more like provincial/farce theatre than most other forms of television or media. There is nothing else like them (except, perhaps, for a badly made soap).

Single camera sitcoms, though, are filmed in a completely different way and ultimately have a totally different feel to them. They're more like TV drama - or movies - than studio sitcoms. They have a slightly different pace. Sometimes have a fresh style or idea, like Peep Show's point-of-view shooting or The Thick of It's shaky camera (which was very original when they started doing it). Other shows just feel like they should be out and about, like Rev, which works well as it is, and nicely avoids any kind of comparison to the Vicar of Dibley, which casts a long (and wide) shadow over any kind of subsequent ecclesiastical comedy.

And then are other shows from the last few years are undoubtedly classified as comedies, but would shy away from the term 'sitcom' because they don't feel very 'sitcommy'. And yet shows like Him and Her or Roger and Val Have Just Got In are are half-hour narrative comedies. They don't need to be single-camera because they are totally confined shows that could be shot easily on TV studio sets in front of an audience but they have their own pace which is, ironically, more like Pinter-esque theatre. It would actually work well in front of a particular studio audience but probably not the type who applied for tickets to Mrs Browns Boys and got Him and Her instead.

This latter sort isn't my kind of comedy (it will not be surprise, I'm sure given I've been involved in writing Miranda and My Family) but it's worth noting that shows like Him and Her can only exist because The Office and The Royle Family went before them and showed what is possible when you slow things down and move the camera in. Of course, this can still be achieved with a conventional studio sitcom - Porridge and Only Fools and Horses were able to create stunning moments of pathos and emotion but these moments were the exception rather than the rule.

This Really Hasn't Helped, Has it?
So where are we? In one sense, we're at a point in time where the opportunities for writing original comedy shot in interesting and imaginative ways have never been better. In the last year or two, a huge range of shows have been broadcast that are all trying to achieve slightly different things. On Sky we have Moone Boy, Hunderby, Jinsy and Trollied. On Channel 4, we have Peep Show and Fresh Meat. ITV, we have Downton Abbey (it's hilarious. Oh). And on BBC, we have Miranda, Him and Her, The Thick of It, Mrs Brown's Boys, Pram Face, Rev - all of the above competing against reruns of Dad's Army, Porridge and Blackadder. So, it's up to you. The only question is whether you've got an idea and a well-honed, elegantly plotted, beautifully crafted funny script that can cut through all that.
Posted by James Cary at 20:24 2 comments:

The latest edition of The Larbey is out now. Well, here, at least. If you right-click it, or something, you should/might be able to get it bigger. Previous editions here and here. 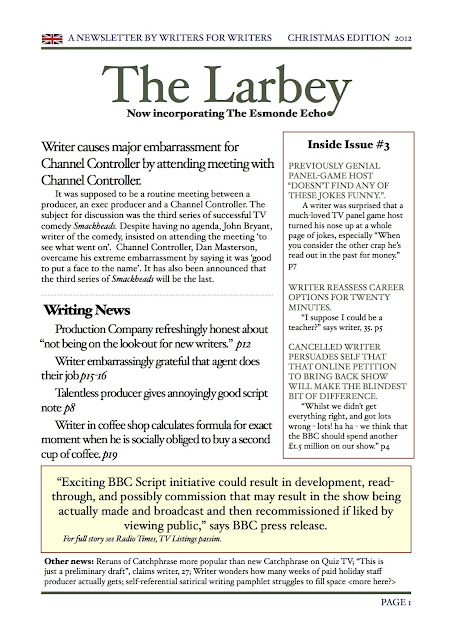