You’ve got some characters and a situation. You’ve got some relationships and some stories. But how do we turn that jumble of jokes and jeopardy into a script?

And not just a script, but a pilot script?

That’s what we’re covering in a pay-what-you-like webinar I'm running on 30th May at 6pm UK Time.

I'll be using a practical sitcom example from our last session (which you will get to watch on replay if you sign up) to do that so that it'll be a bit like being in a writers' room.

I’ve read a lot of scripts in the last couple of years, and it’s quite common to enjoy a script for a few pages, the characters and the jokes, but soon the problem becomes obvious.

There isn’t really a story. It’s all ‘set up’. Nothing is happening. There’s lots of talking. But no action. So the characters stop being funny because they’re not being put under any pressure.

Or the script is going somewhere – but that’s not a place we want to go because it’s taking us away from the idea for the show, from the main location, from the world that’s being created.

30 pages seems at lot at first, but it’s not very much to show what your sitcom is really about, what a typical episode will be like, why we’re going to want to watch it week after week and that you’re the one to write it.

And most readers and producers have made up their minds by page 10. At the very latest.

Getting the right plot going fast is crucial for your pilot sitcom script. 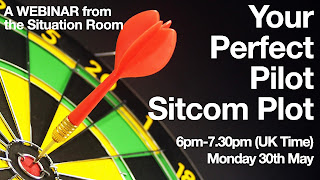 The story needs to be carefully lined up with the idea for the show, the situation, the characters and their relationships.

Find help, answers and experience in the webinar on 30th May at 6pm UK time!

We’re going to be finding out what that looks like, using a sitcom called Big Day.

We’ll be thinking about three different options for our opening episode, how each idea might pan out, and which might be best.

When you sign up, you’ll get a PDF with the characters, the situation and some storylines to think about - and access to a replay of the previous session. And you can pitch some ideas in the webinar, or even email some suggestions beforehand. It’ll be like being in a virtual writers room. Do join us. The last one was great fun. This will be even better.

Could I Write A Sitcom?

Yes you can! Here are four reasons to be cheerful and two to be careful, plus what to do next: