Is your Lead Character the Least Funny Character in Your Sitcom Script?

You can either read this blog, or watch me explain the whole thing in SEVEN minutes - with some nice visuals and graphics - here:

Last time, I was fairly robust about why your pilot script should not be the first day at work for your lead character. Why? Three reasons.

Reason #1 The First Day At Work plot is a grindingly common tactic in a pilot script. Your script needs to stand out amongst the thousands of other pilot sitcom scripts floating around.

Reason #2 Your character is going to be acting out of character on their first day, being on their best behaviour. We need to establish them fast.

Reason #3 And this is the most important, your lead character is going to be passive for at least the first ten pages. That’s a problem because that is when the script reader is making up their mind about the script. They need to be making choices, revealing character and being funny, rather than nodding and noting where the coffee machine is, and where the mugs are.

But here’s another reason to avoid a ‘first day at work’ pilot plot: all of your other characters are going to be funnier than your passive lead who’s wondering the office wondering what they’ve gotten themselves into.

Let’s say your lead protagonist, Deborah, is being shown around the office on her first day.

Scene one is the obligatory pep talk to herself outside.

Scene two is at reception where she is polite to the receptionist, Alice, who is engrossed in a video chat with her sister who is trying to chose a wedding dress and not paying Deborah any attention.

Eventually, scene three, Alice passes Deborah on to Jake whom we find having a fight with the photocopier to the point of declaring war on it.

Then Deborah meets Megan and Val. They are having a long-running feud with each other over office plants, which is escalating to the point where one part of the office is now a jungle.

Next Deborah is surprised that her boss, Clem, is trying different swimming costumes for their next conference which happens to be in Hawaii.

It’s Page Ten. Deborah has done nothing but react. She is passive.

And who’s the funniest character so far?

Answer: NOT DEBORAH. Deborah is booooring.

So we’re off to a terrible start.

As a script editor or development producer, I’m looking at this pilot script saying ‘this could work if you just get rid of Deborah’. I like Alice, Jake, Megan, Val and Clem. Lose Deborah.

You might have one of two replies to that:

Reply #1 You say, “Yeah. Wow. Deborah is boring. I guess she was useful to begin with, but actually she’s not necessary”. Great.

Solution #1 Deborah deleted. Script gets rewritten and we’re into it.

Reply #2 You say, “But the WHOLE show is about Deborah and her journey!”

We have a problem. One is existential one about what a sitcom actually is (it’s not about Deborah’s journey but we’ll get to that in a future post).

But the main issue here is a comic problem. This ‘first day’ storyline is essentially preventing Deborah from being active and funny.

Solution #2a Your solution might to have Deborah apply for that job and make her more active.

The solution even worse than the problem. We’re going backwards. Your character needs to pointing forward. What do they want? What is their goal?

Solution #2b Fast forward. Deborah’s been there six months. Or it’s her first anniversary of being there.

Solution #2c Even better, just have a regular episode based on her character and situation. Jake’s plotting the demise of the photographer. Megan and Val have some kind of foliage/turf war going on. And Deborah is concerned that her boss’s trip to Hawaii is going to be a huge problem for her – and she has to put them off going. Clear goal. Stop boss going to Hawaii.

Next time, we’ll consider why Alice, Jake, Megan, Val and Clem sound funnier than Deborah, and what we can learn from that. 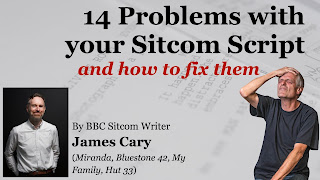 This is one of many mistakes it's easy to make in a pilot sitcom script. Why not find out the most common 14 problems, based on the experience of reading literally hundreds of scripts in the last year? And crucially, find out how to fix them. Have a look HERE.
Posted by James Cary at 17:29