The Hills Are Alive with the Sound of Sitcoms 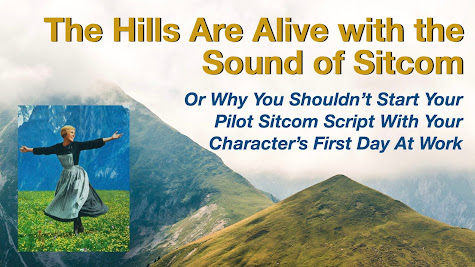 “Let’s start at the very beginning, a very good place to start…”

That’s how Maria (Julie Andrews) starts her Do-Re-Mi song. If you’re writing a pilot sitcom script, what could be a better way to introduce the audience to the characters than following around the main character on their first day at work? Sounds sensible. Right?

As far as writing a sitcom is concerned, it’s terrible advice. Do me a favour, Maria. Take your guitar and climb a mountain. So long. Farewell.

Do I sound a little tetchy on this?

It’s because since the beginning of this year, I have read over three thousand pages of sitcom script and this ‘first day at work’ plot is a very common feature to many, probably most, of these scripts that haven’t been picked up or shortlisted.

It’s their first day. They’re nervously standing around outside giving themselves a pep talk before stepping into their new place of work.

Or, worse, we start with a ringing alarm on a bedside table, and a character floundering around getting ready for their first day, shouting at their partner, or their kids, kicking the cat and then running out so as not to be late on their first day.

Or worse still. They’re applying for a job (at which they get to explain their backstory). Then they get the job, and then it’s their first day.

Why am I taking exception to this whole ‘first day’ thing? Why is this a problem?

One might think one reason is that if everyone else is doing this, then you should do something else. March to the beat of a different drum. Be the odd one out. Zig while the world is zagging. After all, we had 887 scripts for our Sitcom Geeks Hattrick competition.

That’s true enough. When a huge number of scripts are starting the same way, the reader of the script – who is a human being, remember – is going to groan.

But the reason not to start your script with the protagonist turning up to work on their first day is this: your protagonist is going to be passive. This is a serious problem.

In a sitcom, we need to see the hero making choices. In fact, that’s not unique to sitcom. That’s drama. That’s novels. That’s movies. That is how character is revealed, through choices which bring chaos and conflict, and with a bit of luck, a following wind and several rewrites, a chance of comedy.

How were you on your first day at work?

I’ll tell you. You were on your best behaviour. You were not yourself.

Unless your protagonist a maniac or psychopath, they’re going to be terribly nice to everyone while they are guided from room to room, being introduced to other members of the team. We’re not going to find out what they’re really like for ages. The reader needs to know what the character is like because she’s got a hundred other scripts to read. The viewer needs to know that because he’s got serious options when it comes to alternatives to your show.

So my advice – having read 3000+ pages of sitcoms in the last two months - would be this: Avoid pilot sitcoms script where it’s the main character’s first day.

Now, you might be screaming names of sitcoms which do exactly that. Fine. We might get to those. And I’ve written two sitcoms where it’s a character's first day (Bluestone 42 & Hut 33), but I’m going to justify those in a future post. 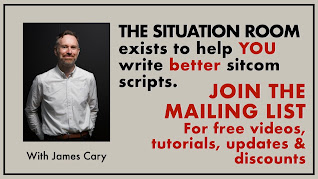 But for now, why not join my mailing list, The Situation Room? You'll get all kinds of help writing your pilot sitcom script, including access to free videos about Plotting, Creating Characters and all sorts. It's free. Join here.