We're looking to form better habits in the new year. Last time, we looked at how writers are readers. And I’ll be honest. This post is also about reading. Except a different kind of reading: listening.

After all, how much time do you make for reading during the day? Probably almost none. Maybe there’s a commute. Or used to be. For many of us, we read in bed, and that’s about it. And that's not a lot of reading. It's not enough.

That doesn’t have to be the case. Before we get onto listening, you could read one evening a week instead of watching TV. The pictures on Netflix are good, but even better in your head. You could cancel Netflix for three months and read instead. New habits are hard to form if you don't make an early change that reinforces the habit. And the boxed sets will all be there when you go back to it. And also, do you need to watch 2hrs+ of TV a night?

Listening Is The New Reading

You can read when you’re washing up, driving or balling socks. You can listen to the best voices reading our finest books. In fact, decent voices reading perfectly serviceable books is superior to the 24 hour news cycle, which doesn’t get you anywhere. It’s a news cycle. The clue is in the title. It gets you back where you started, except slightly angrier and more stressed. Why not listen to Treasure Island? Or Daniel Deronda? Or Hard Times?

Audible’s fab and just works. It has pretty much cornered the market, but there’s a free public domain version called Librivox (there's an App for that), in which enthusiasts read aloud books that are out of copyright. Worth a go.

I’ve been hooked on audio for years. I don’t listen to any news or broadcast radio and haven’t for at least a decade. I’ve been listening to podcasts.

But if you're not careful these can have the same effect as news, commenting on recent cultural developments and stoking anxiety or rage. You end up listening to similar podcast and we're back to the algorithm and the echo chamber. You're a writer. You need to get out of that space. Take decisive action.

A while back, I deleted the Podcast App on my iPhone. Podcasts, downloads, everything. It's a truly awful app and Overcast and Pocketcast are much better. But I wanted to start again and try new podcasts on a new App rather than returning to the same voices saying the same things over and over. The Bible, surprisingly, warns against being a dog returning to its vomit. Did you know the Bible said that? Have you read the Bible? Try that. If you have, have you read other foundational texts like Pilgrim's Progress (which I have read and dislike), Paradise Lost (which I've not yet read but realise I need to). Or the holy books of other faiths?

Alongside the bonfire of the vanities on my podcasts, I’ve increased the number of audiobooks I listen to. The other day, I even bought Simon Armitage reading his own translation of Sir Gawain and the Green Knight. Why don’t you make an impulse purchase like that? And then listen to it? While you clean the kitchen or dig the garden? And I'll listen to Milton's Paradise Lost. 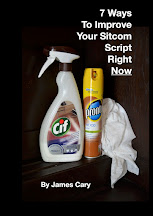 Ingest more books. Make time to read them. Listen to them. Buy some decent wireless headphones and listen to more proper books.

If you have a script a polish before sending off to the BBC Writersroom or an agent or producer, I've produced a PDF of 7 Things You Can Do To Improve Your Script Right Now. Get it here.