Are you Writing Fan Fiction rather than a Sitcom?

Previously on this blog (and my Youtube Channel), we’ve looked at 5 Mistakes In The First Ten Pages Of Your Sitcom Script. But I’ve thought of a sixth – and it partly comes from the previous post, What Makes A Truly Great Sitcom?
Here’s the mistake and then I’ll explain it. It’s this.

You’re writing Fan Fiction. Not a sitcom. You’re writing fan fiction, not a sitcom.
What I mean by that is this: You love sitcoms. You loved watching them growing up as a kid. You watch them now. New ones. Old ones. Classics. And the ones that don’t work but still have a charm to them (like Paris or Nathan Barley). And you want to write them. Why wouldn’t you?
You’re basically in love with the form, and so you try to create your own. This is where a lot of people start, and I did this. In fact, fan fiction is technically writing something from an existing universe. So if you’re writing Harry potter short stories, that’s fan fiction. You can’t make money off it, but people do it. 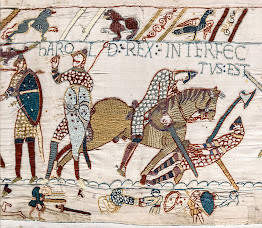 In fact, when I was about 18, I wrote a fan fiction episode of Blackadder, except it was set during the Norman Conquest, and Baldrick managed to shoot Harold in the eye at the Battle of Hastings. I know great idea. (I now realise its basically the same as first episode of the original Blackadder series at the Battle of Bosworth.) I loved the show and I wanted to have a go.
This 'fan fiction' is not to be confused with the 'spec script' which, to be honest, is an American phenomenon and isn't such a thing any more. That’s where you show your credentials as a writer. It is writing an episode of an existing show to prove that you can write in someone else’s style or voice and that you are able to join a team or table of writers on sitcom.
In a way, it's a good exercise, because you’re taking proven characters in a proven situation and trying to make it work with a new story. It’s like riding a bike with stabilisers. All fine.
But it may be that you love sitcoms, you want to create your own. You want to be a sitcom writer. And you’ve come up with a situation that feels original, with some characters, and you’ve got some stories and some jokes. Now that’s all fine. You’ve assembled something that looks like a sitcom.
The problem comes when you send it off to producers and enter it into competitions. And it’s not getting anywhere. No-one’s interested. And you can’t figure why. In your mind, it looks exactly like the shows you see on TV. In fact, you think it’s better than some of the shows you see on TV. It's all very frustrating.
But what you’ve got there, and often becomes obvious in the first ten pages, is fan fiction. Not a sitcom script. It’s a love letter to the art of sitcom. But it’s not actually a sitcom in it’s own right.
Truly Great Sitcoms have a timeliness about them. Or they’re about something timeless. They’re about a particular kind of relationship expressed in a new way. Or they’re about a new situation that’s arisen in society, or a character we’ve not seen before but feels of the moment.
In short, any sitcom needs a reason to exist.
You can’t speak a sitcom into existence by saying here are some characters and a situation. Here’s a plot and are some jokes.

If I asked you what your script is about, you might say it’s about a car mechanic. And you point to the three guys in boiler suits, the tow truck, the receptionist and the MOT inspector. The plot is based on the realisation that a spanner has been left in a car and that car is now a death trap and they have to get if off the road without admitting they made a massive mistake.
Problem: That’s a sitcom and a plot that could have been in any sitcom about car mechanics for the last 60 years. It’s not enough. That's fan fiction. Why are you writing this show now?
So here would be my question: what your car mechanic sitcom really about? The answer should not be car-based. Car's are a symbol or metaphor. (The Top Gear of the Clarkson was not about cars, but freedom)
So what is your sitcom really about?
Is it a show about father and two sons, and he can’t decide who should be in charge when he retires? It’s not great but it’s a start.
It is about a guy who’s told old for cars because essentially, they require laptops and code to reprogramme these days and that’s a whole new ball game. The aging mechanic is in denial about it and he won’t listen to his daughter who is trying to modernise the business.
Is it about a woman who’s great at fixing cars but no-one will take her seriously, even a world where she thought equality had been settled?
Is it about a guy who fixes classic cars, who doesn’t want to live in the modern world because he doesn’t want to face up to some awful truth about the world and himself?
That’s the kind of thing you show should be about. (one of them. Be specific)
And do you know what? If your script has a really strong and clear reason to exist, a clear viewpoint, if it feels of the moment, the person reading that script will probably forgive mistakes 1-5 and might well get in touch. There's an awful lot of sitcom fan fiction about.
So look at your script and ask what’s it really about? And you need a really good answer.
If you don’t have one, you’re just writing fan fiction. Which is okay. It’s good to get it out of your system. You've done the exercises. You've gotten used to characters, situations, writing dialogue and all that. But you probably need to start again. In which case, I’ve got a video course for you which arrives on 7th January 2021.

I say all over the above on my YouTube channel called The Situation Room.

And from 7th January 2020, my video course will take you through the whole process from beginning to end.

But if you’ve got a script that needs some improvement, there’s a lot to be said for making it as good as it can be. In which case, get my handy guide called 7 Ways To Improve Your Sitcom Script Right Now.