Have you written a pilot sitcom script?

There’s a very good chance that your first ten pages contains at least three of the following:

How did you do? Marks out of ten?

A high score is bad.

I say this because having read literally hundreds of scripts in the last year, the majority of scripts contain an opening scene that runs for at least seven pages - normally nine - and includes every main character.

And there’s usually a pretext for introducing someone to everyone eg. it’s often the first day at work. (I’ve written a lot about this and made a video.)

Everyone’s standing around waiting for the story to start.

Give another character a quest by the end of page 5. Even better, by the of page 4.

Even better, have your main character decide to go on a quest, rather than have one thrust upon them. 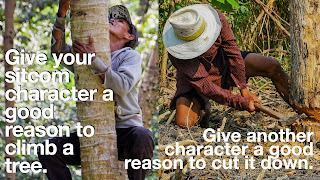 There’s a saying that in a comedy you should chase your character up a tree and then throw sticks at them.

Or at least sub-optimal. Your character is being passive.

Give you character a clear reason to want to climb a tree. And then have them invite people to throw sticks at them. That way, your character is being active – and their own worst enemy.

And then give another character a good reason to cut the tree down.

Now it's getting funny.

Want more? Want to get into the nitty gritty?

Come to my pay-what-you-like webinar at 6pm (UK Time) on Tuesday 28th June where you’ll get 90-minutes of hands-on writers room experience with me and whoever else turns up.

We’ve done it twice before, and it’s both fun and useful. In fact, you get access to the replays if you sign up. Find out more over here. 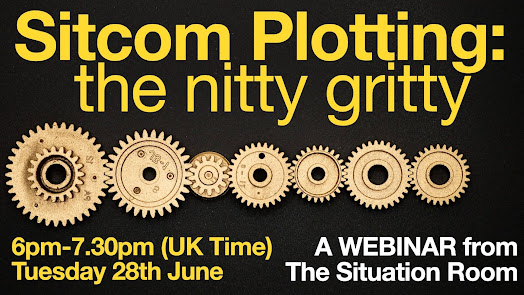