What Even Is a Sitcom These Days?

If you’re trying to write a sitcom, or get into sitcom writing, it’s worth taking a step back to ask what you’re getting into. What even is a sitcom?

In the days of Cheers and Terry and June, it was pretty obvious. These days it’s harder to know as the genre has morphed in these times of multi-channel, multi-platform, second screening and binge-watching boxed sets which also mash up comedy and drama.

If you want to know more about the difference between a sitcom and comedy drama, because you're trying to write a comedy drama, or can't decide if what you're writing is a sitcom, or a comedy drama, I made a video that should help, and you can watch for free via here.

There's A Lot Of It About

There is a lot of comedy drama about. But sitcoms have not changed as much as you might think.

The word ‘sitcom’ might sound meaningless or dated, especially if you’re watching all kinds of genre-busting content from all over the world through streaming services. But, despite what the media suggests, we don’t live in a world dominated by Netflix.

In fact, the majority of households don’t have Netflix. Google the stats. It's true.

And those that who do stump up for Netflix, Prime or Disney+ often get overwhelmed or can’t find anything they fancy so go back to watching Frasier or The Vicar of Dibley reruns on the TV or iPlayer.

Or they binge watch Friends on Netflix.

So what’s the lesson here?

Friends, by itself, is a multi-billion-dollar franchise that still generates a ton of money. People are still watching it and rewatching it. Teens are discovering it. A few of the references are dated, and we cringe now and then, but it’s rock-solid wall-to-wall never-fails funny. The same goes for Seinfeld and Frasier.

In the UK, for years, the best performing sitcom on BBC2 that garners more viewers than every new sitcom by half a million viewer is Dad’s Army. It also get more viewers than any new comedy on Channel 4, with the possible exception of The Windsors. In fact, switch over to Channel 4’s network of channels and you’re never far away from an episode of Father Ted, or Black Books. And many people have seen those episodes many, many times over.

Most of these shows are traditional studio sitcoms, being shot on a few sets in front of an audience, with a small group of familiar characters. The time frame is normally 24-28 hours. And there’s normally one clear main story and a couple of subplots, all with a beginning, a middle and an end. Friends makes that very obvious, where each episode is called ‘The one with…’

And these sitcoms are still being made.

After Friends came How I Met Your Mother, which did pretty well. Then there was the massive studio sitcom hit Big Bang Theory. In the UK, we had IT Crowd, Miranda (in which I was involved), Not Going Out, Mrs Brown’s Boys and Kate and Koji. These big traditional shows, when you get them right, can do really really well. And channel controllers want that.

The Awful Sounds of Human Laughter

But who wants to shoot a show in a studio these days? With that awful confected sound of human laughter? Let’s not get into canned laughter right now. For now let’s note the big secret hiding in plain sight:

Single-camera non-studio shows are basically the same in format.

You mostly have a small group of characters, with a main plot with a beginning, a middle and an end over the course of 24-48 hours.

This is how most episodes of single camera shows work: The Office, 30 Rock, Arrested Development, The Larry Sanders Show, Parks and Rec, Veep and Modern Family.

They may feel fresh and innovative, and have interesting story techniques and special episodes that entirely take place on a laptop (see Modern Family (right)) but at heart, they’re just good old-fashioned sitcoms.

So what’s the point for those of us in the business of writing and creating sitcoms, and writing scripts?

It’s this: Keep it simple. Trust the format.

These sitcoms, past, recent and present, are not just a tried and tested formula, but a huge part of audience expectation. And, let’s be honest, it just works. That ‘simple’ story, well told, with a beginning, middle and end, is what we are looking for in a sitcom. We deviate from that at our peril. 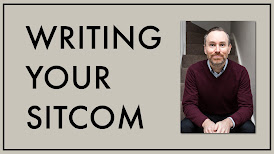 Keeping it simple and holding your nerve is all very well if you know what you're doing. I get it. So if you want to write a sitcom from scratch, or whatever you have been doing before hasn’t been working and you want to start all over again, why not consider my comprehensive Writing Your Sitcom video course. There are twelve clear steps, each with a video and some homework, all contributing to the final product: a sitcom script that you can be proud of. Worth a look? Let me tell you more about it here.
Posted by James Cary at 13:40