In Part 1, we looked at the motivation for writing, both right and wrong. Here in Part 2, let's look at the business of actually writing. How is going to happen more consistently in 2021?

What’s my advice to aspiring writers?

It seems rather silly, but I’ll say it anyway: Write.

It is surprising how many people talk about wanting to write – and genuinely do want to write – but don’t actually write. Why?

A common barrier to putting finger to keyboard is fear. What if it’s no good? I can help you there. In fact, I can let you into a secret.

(whisper) It won’t be good. Not at first. Your writing will probably not be very good for a while. (normal voice) Why would it be? Writing looks easy. But what you see isn’t writing, but typing. Typing is easy. Writing is hard.

Like anything, you only get better at writing with practice. No matter how good you are at the start, and how successful you are later on, your early work will make you cringe. This is unavoidable. The early stuff often has a freshness, novelty or even naivety that is appealing, but also some big clunking mistakes. But you can’t get experienced and grizzled and embarrassed about your early stuff without making a start now and getting that early stuff out of the way.

Start writing. Some of it will be good. Now and then, I stumble across things I wrote nearly two decades ago and am surprised I managed to think of that joke or have that idea. But as a rule, I avoid all my previous TV and Radio series. In fact, there are many episodes of radio that I've not heard since being at the recording in front of then audience. I've not heard the final edit, the first transmission, the CDs I've been sent or the MP3 or versions on Audible. All I see and hear are the mistakes, the scenes that don’t end right and the jokes that don’t land.

There was even worse stuff on my hard drive that never made it off the screen. So here’s another secret. Lean in.

Oh, you were. Sorry, can you move back?

Thanks. Here's the secret: You don't need to show anyone.

You can write and write and not show anyone the results. For ages. If ever. No-one needs to read it.

But you need to write it. If you want to be a writer, if you have a story to tell, if this is something you want to master, you do need to write. Something. At some point. Soon. And regularly.

The Mood Will Not Take You

If you want to improve you will need to write a lot. That's means regularly. If you only write ‘when the moods takes you’, you will probably discover the mood doesn’t take you very often, or quickly changes. Any experienced writer knows that you just keep writing.

Some days it’s good. Some days it’s bad. You rewrite the bad stuff on the good days. And some bad days turn out better than you thought. And sometimes you delete the whole thing. But you keep writing. Go back and improve it another time. But you can’t readily improve a blank page. You need to write something. Then you can rewrite it.

You will only write if you make time for it. This doesn’t just happen. Everything takes longer than you think it will. The urgent always squashes the important. You need to get into the habit of writing at a particular time of the day or week. Make that happen.

Can you write something every weekday first thing in the morning? That’s what I try to do. I’m freshest in the morning. I try not to agree to any meetings or phone calls in the morning unless they are unavoidable. I try and get as much written as I can before lunch.

Unless I’m really up against it, I find I can’t write for more than a few hours a day anyway. I’m not alone in that. If you can write for three or fours hours in a day, you’re doing really well. From reading about the habits of other professional writers and authors, most tend to find that they write best in the morning, and do other things in the afternoon.

After lunch, I try to get out for a walk or do something else. When come back I edit podcasts, answer emails, edit YouTube videos, Tweet, take meetings, do my accounts and crunch admin. I’m not frustrated when I do those things because I’ve actually written something in the morning and I’m not chasing the day.

Recently, I’ve tried to have two zones in my office. One zone if for writing in the mornings, with lots of natural light and a good view. That’s how I’m writing this now – using my old laptop which does fine for this sort of thing. (Full disclosure: I’m rewriting this on the kitchen table in the afternoon.)

In the afternoons, I use my newer computer which is better for heavy lifting, like processing videos for my YouTube channel, The Situation Room. When I write, I try to have the email apps closed, and turn off notifications. Every morning, I get a reminder from myself which says that I can’t look at Facebook until 4pm. All of these things are distractions that have to be shut off for those precious few hours when I get the business of writing words done.

It's Alright For Some

What I’ve just described is like an impossible luxury for some. I get it. I realise how blessed I am to make a living as a writer. But firstly, I didn't used to be writer. Like everyone else, I used to want to be a writer and had to figure it out. Richard Bach (no idea) says, “A professional writer is an amateur who didn’t quit.”

My writing principles apply to writers in all situations. You can’t write at a kitchen table with people coming and going and constant interruptions. It’s just too hard. Either go out to a café (pandemic permitting) and put in headphones. Or go to another room in the house. Upstairs. Quiet. Or put on over-the-ear headphones. Figure it out.

But here's what you really need to do:

Tell members of your family, or housemates, that that is what you are doing: writing. For a specific period of time. They almost certainly want you to succeed at your writing (to stop you going on about it, if nothing else). But they don’t know how to support you. They can do that by shutting up and going away and letting you write for a couple of hours. Or even just 45 minutes.

This, in turn, gives you an extra incentive to write. If people you love are making allowances for you to take time to write, you’re now morally obliged to actually write something. So turn off notications – switch of your router or wi-fi if necessary – put your phone in another room and write. (Remember it will be bad. So don't get frustrated. Write anyway)

Repeat the process as many times a week as you can for three months. Then a year. And you will have written something substantial. And there's a chance it doesn't suck.

If you’re fitting your writing around raising kids or a full time job – or both – do three things:

First, find two or three times in the week to write, even if it's twenty minutes at a time, and put them in diary or planner.

Then, second: tell people you live with that that is your time to write. Give them the chance to support you in your endeavour. Ask your other half to take the kids out of the way or put on Disney+. Tell your other half you won’t be watching TV on Thursday nights (so they can watch that boxed set you never fancied) because that’s when you want to write. And you want to write Netflix, not just watch it. Put some time in the diary, and pour concrete around it.

Third, turn off notifications, switch off your phone, and write.

Do this and you might find you’re writing for 1-4 hours a week. Could you manage an hour on Saturday too? Take Sunday off. Rest.

Eventually, but suddenly, you’ve written something. That’d be good, wouldn’t it? 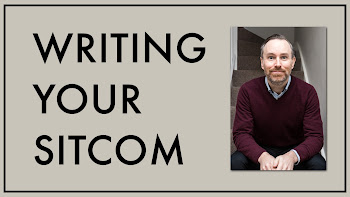 This is all takes time. That's one emphasis of my new video course, Writing Your Sitcom. Creating a 5000 word sitcom script that you don't hate takes many many hours over many many weeks. That's why it's a 12 step course which breaks it all down into manageable chunks that you can act on, rather than packing it into a frenetic weekend.

You can watch each video as many times as you like, learn each lesson and build your script in your own time at your own pace. It's all there. Just set aside time to watch the lesson, and grab the notes, and view it. And make your own notes.

Do the set homework in your own time - which is geared around writing your script, rather than arbitrary writing exercises. But it's all meant to make you a better writer.

There are even monthly Zoom chats with me included, to check on progress and ask me anything you like to make you're not going mad (or establish your script, at least, is not the primary cause).

And after a few months, you might have a script you can bear to put your name on and send to someone. Worth a look?

In the meantime, keep checking back for updates on this blog, which will be updated frequently in 2021. Follow me on Twitter for updates.