The Sitcomgeek book is finally here. Or there on Amazon, at least. Writing that Sitcom is available for Kindle and Kindle App now. (If you're interested, here's why it's on Kindle and not a 'real book').

Here is the intro to pique your interest yet further:

They never liked David Frost. The cool kids, like Peter Cook and Willie Rushton, thought he was a try-hard. In a sense they were right. David Frost tried hard – and wasn’t afraid to be seen to try. And he really succeeded, fronting the legendary That Was the Week That Was and The Frost Report as well as chat shows in America and Australia. He interviewed Nixon, launched a successful breakfast television show, and received a Knighthood.

Sir David Frost was some kind of genius. He tried. And succeeded.

For Cook and Rushton, genius should at least appear effortless. For Peter Cook it probably was. He had one of the greatest comic brains in the history of the English Language. Comedy seemed to come so naturally to him that it wasn’t even fun.

We Brits love the idea of the effortless genius. We love the Peter Cooks of this world (see also Peter Sellars, Eric Morecambe and even Oscar Wilde). We love their wit, their inventiveness and their charm. And we laugh at the try-hards. We never truly respect the David Frosts, despite their enormous achievements. In fact, sitcoms are full of hapless try-hards who will never get the respect they crave despite their best efforts.

Why start a book about comedy talking about Frost, Cook and Rushton? Because it’s easy to fall into three traps when thinking about writing comedy.

Trap 1 – The mistake of thinking Great Comedy Is The Work Of Unalloyed Natural Genius.

There are comedy greats, like Peter Cook, who seemed to have instincts that the rest of us can only dream about. But it’s extremely rare. And much of it is myth. Look into the history and you’ll discover that genius of sitcom often cut their teeth writing episodes of kids’ shows or sitcoms that really weren’t great or didn’t last. I’m not claiming to be a genius, but I did write some episodes of Chucklevision, as did Russell T Davies.

They say “You’ve either got it you haven’t”. Like all sayings, there’s an element of truth to it. There’s no point pursuing comedy writing if you have no aptitude for it whatsoever. You need to have some instincts for comedy, but they are only the starting point. Instinct is important, as is perseverance – and these two things will carry through as you learn the craft.

Trap 2 – The mistake of thinking Comedy Is Something Anyone Can Do.

There’s an increasing ‘competition’ mentality seeping into the industry. Well-meaning institutions like the BBC, in their attempt to find new comedy voices, give the impression that anyone with a good idea for a show will be able to turn in a smoking hot script without too much effort. It just takes a laptop, some strong coffee and a long weekend. And then if they’re lucky, they’re sorted for life. They’re ‘a writer’.

The problem with writing is that it seems easy. Typing is easy. But writing is not. Being a writer is not like ‘a real job’ where you have to study hard, sit exams and get qualifications. There are quite a few jobs you can’t just rock up and do. You can’t use your ‘natural flair for open heart surgery’ to get you a job cutting people open in a hospital. You need years at medical school and you have to pass exams. And you can’t just use your skills of rhetoric to simply ‘be a barrister’. These things take time.

Writing sitcoms is the same. It takes time to get good at it. You just don’t need any accreditation or specialised equipment.

But as we will see in this book, writing a script, especially a pilot script, takes months, even for those who’ve been working in the industry professionally for decades. Every now and then a ‘genius’ comes along who seems to have knocked out a brilliant script in an afternoon, but that’s not you. Or me. 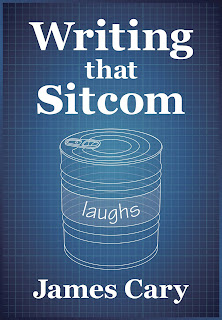 This book assumes you are not Peter Cook. If you are Peter Cook, and your brain is just wired funny, throw this book away at once. Burn it. Delete it. Destroy it without reading the contents. I look forward to seeing your show on TV and buying the boxed set. But the odds are that you are not a natural. If you’re not someone special, like Sir David Frost, you’ll just have to put the work in.

Here’s one more dangerous idea floating around the place.

To find out about Trap 3, have a look at the free sample on Amazon here.