Yes. Allo Allo. I loved it. And I still like it. 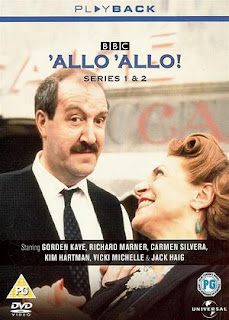 It's a big, broad, bawdy panto-style comedy. But just think about the show for it minute.

It's a comedy set in Nazi-Occupied France. Two British Airmen need to be smuggled out and anyone caught aiding and abetting them, or working with the French Resistance, will be shot.

The German soldiers are not cold-hearted fanatics, but portrayed as humane bungling idiots just trying to survive the war like everyone else. In the first two series, they even made their Heil Hitler's funny. Their worst nightmare is being sent to the Russian front where death is almost certain.

Undoubtedly, this show couldn't have happened without Dad's Army and It Ain't Half Hot Mum, also by David Croft, and the hit movie The Producers. These all paved the way for something this subversive and yet so mainstream.

On top of this, it's all done with strong foreign accents, and we are invited to imagine that when their accents are French, they are speaking French. When they switch to plummy English, they're now speaking English. And of course the English Policeman, Officer Crabtree (Arthur Bostrom) mashes the two. It's a simple joke, but a funny one, and it keeps on giving (see below). What language the Germans and French remains a mystery, but it doesn't seem to matter. It just works.


The show ran for ten years, with over 80 episodes. It was undoubtedly a huge hit worldwide and is still repeated today. What can we learn from it, should we be minded to do so?

Complexity and Simplicity
The show is very simple to understand because the uniforms and the accents make it crystal clear who's who, who the good guys are and who the bad guys are. And who the very bad guys are (eg. the Gestapo, General Von Klinkerhoffen, etc). Because the writers had confidence that the audience knew exactly who was who, the shows were able to sustain ludicrously complex and convoluted plots. It became a serial, but each week, Rene Artois was able to talk to camera and explain to us, in his tired and jaded way, what was going on - and the exact location of The Fallen Madonna with the Big Boobies by Van Klomp. And then latterly the Cracked Vase with The Big Daisies by Van Gogh.

The painting are another clue as to the show success and appeal. Everything was on the screen. Being in the panto-style, the show had big clear props, like stolen paintings and smoked sausages, and elaborate disguises, made all the funnier when underneath them was stone-hearted Herr Flick of the Gestapo (and sometimes Helga, or Von Smallhausen). Or L'Eclair. This meant that the show was really easy to follow and understand, and comedically, that really helps. Big, silly, significant props really help in this. And if you're looking to write a mainstream comedy, it's worth bearing this in mind. I say again, as I regularly do on this blog, confusion is the enemy of comedy.

Catchphrases
Allo Allo is riddled with catchphrases. If you took the catchphrases - and their set-ups - out of the show, you might only be left with a few minutes. Almost every character had a catchphrase that you could see coming from a mile away. 'It is I, L'Eclair', 'My little tank', 'Listen very carefully, I shall say this only once', 'I see flashing knobs', 'You stupid woman', 'Whadda Mistaka to Maka'. The list goes on and on. And you know what? The audience loved it. Every time.

What do we learn from this? Simple. Audience love catchphrases. If you, as the writer, don't decide what they are, the audience might well decide on their own. (This is what happened on Bluestone 42 where lines from the show are now on fan-generated T-Shirts)

Allo Allo will clearly divide audiences now, many of who don't appreciate the stereotyping, the cod-accents, the casual sexism and the fact that it is very formulaic. Fair enough. I loved it. They still repeat it and I sometimes watch it and still makes me laugh out loud. It was very helpful to me when I was writing my Radio 4 sitcom Hut 33 in terms of how to approach a wartime comedy, so it's in my Top Ten. At  Number 9.

For more sitcom analysis, why not look at my book, Writing That Sitcom, and listen to the Sitcom Geeks podcast.
Posted by James Cary at 14:54