Your sitcom characters can normally be described using adjectives. In general, you need to think of actions they can take so you are showing us, not telling us. But let’s stick with the adjectives for now. So here’s an exercise for the sitcom characters in your spec pilot script:

Try to think of how the characters see themselves and describe them accordingly:

Here are four characters by way of example. 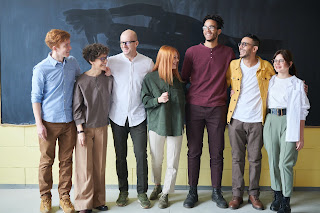 Gordon is a maverick.

That’s how they see themselves. But other characters in your sitcom see them slightly differently.

Try seeing it from their point of view:

Sally sees herself super-organised. John thinks Sally is a control-freak.

But how characters see each other partly depends on the characters’ own specific flaws and personality.

So push your characters one stage further.

John sees himself as intellectually curious.

Big-hearted Isha reckons John always has time for people and is a good listener.

Maverick Gordon knows that John is a coward who can’t commit to a single viewpoint and stick to it.

Similarly, Gordon thinks Isha is a pushover. And John thinks Gordon is a fascinating case study in arrogance. You get the idea. Go around your characters working out how they see each other. As you do that, you will see that a handful of characters and characteristics, and some shades of meaning, creating a web of complexity – and comedy – very quickly.

In the last blogpost, I explained that writing a pilot sitcom script is really hard work. I also used the word ‘frustrating’. What’s the difference between ‘hard work’ and ‘frustrating’? (Not a joke)

If you’re reading a blog like this, you instinctively know that there is a difference, just as there’s a difference between ‘hard-working’ and ‘laborious’ and ‘diligent’ and ‘fastidious’. (You character prides herself on her diligence. Another character would call her fastidious. Another might say she's got OCD.)

So what’s the difference?

The frustration intensifies when you realise you should have seen this coming. Or that you did see this coming but were in denial about it. Frustration can morph into rage, self-loathing and despair rather quickly.

1. Give up. Walk away. Control+Alt+Delete.

The other day, I took up some turf on my lawn so we could have a flower bed. I watched YouTube videos to learn how and discovered it wasn’t technically difficult, but just required a lot of hard work. How much? It was hard to say. Once I’d started with my spade (see pic), I realised this might be even harder work than I had thought, and I very quickly adjusted my expectations. I realised this would take all day.

But once I got into a rhythm, I realised I could get it all done by lunchtime, if I pushed lunch back an hour. I did. And I enjoyed my lunch. The work was hard. Expectations had been adjusted. Frustration was low.

Expectation of the process, then, is key.

It's the same in sitcom writing.

And that’s why I’m running a webinar called Write a Sitcom in a Day course. You can’t write a sitcom in a day. That’s madness. But my aim for the day is to explain what takes the time and how to go about it, so you can have the right expectations going into the process.

It is hard work. I can’t give you any short cuts there. But I can make it a bit less frustrating so that you don’t just start your script, but finish it. And actually, like that flower bed my wife and I planted, it was worth the effort.

So join me on 30th August or 3rd September (9.30am til 5.30pm) to find out what the key steps are and how to make a plan to get that script written. And for that script to be one you are proud of. It’ll be with me, via Zoom, going through the whole process and with loads of time for questions. Details here.

To get an online early bird 45% discount that is good til the end of July, just register with the Situation Room, where you’ll also get access to a bunch of other videos and webinars I’ve done earlier this year that people seem to have appreciated. So register here, get the discount and join us! 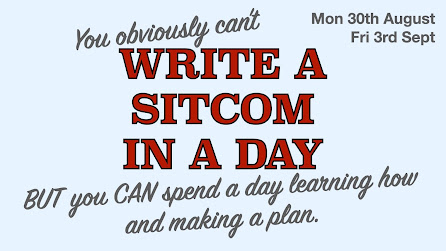