Plotting My Sitcom: How Do I Handle a Series Arc?

In the last post, I looked at the desire to have a series arc in a sitcom or comedy drama. I showed how comedies had overarching narratives decades before streaming services and boxed sets. And if your show  runs for a long time, you can’t avoid children becoming adults, adults getting married and growing old – and actors leaving or dying.

But let’s say your continuing story in your sitcom is a choice rather than a reality of the aging process.  How is that best handled?

Why are you writing this script?

Before we look at some specifics, remember the bigger picture. Why are you writing this script? Yes, it’s proof of concept of your sitcom. It’s a blueprint. You are trying to persuade a producer to go on a journey with you. The two of you will then set out to persuade someone to authorise at least a million pounds to be spent filming your series.

If you’re reading this blog, you’re probably writing a script on spec. So this script is also a proof of concept of your career. It’s a portfolio piece. It is showing that you can be trusted to work on another shows – which is almost certainly what you want. Working on other people’s shows improves your skills, your contacts and your reputation whilst being paid, all of which increase the likelihood of your show being made. 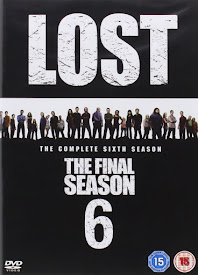 Therefore, you need a script that is telling the reader that you can be trusted. It shows you know how to tell a story. If it’s a sitcom script, it should show that you know how to write funny. You need to show your characters doing funny things for funny reasons. And you need some sort of resolution so they end up roughly back where they started.

I’m not saying you have to play it safe or be boring. Writing a regular sitcom episode is unbelievably hard – and probably harder than a complex plotty drama, where an awful lot of elements can be kicked down the road to be resolved in future episodes or series. (Or, in the case of Lost, not at all)

So I would advise you to write a proper sitcom script which tells a story with a beginning, middle and end - which takes us back to the beginning. Do it with flair, and originality. Make it timely and personal. You need to show off your voice and perspective (which is something I cover a lot more in my video course). But you also need to show that you’ve got what it takes.

Can you write a story that hangs together, escalates, puts your characters through hell and resolves in an unexpected by satisfying way? Answer that question in the affirmative and you will get some interest, some meetings and maybe some work.

So, no series arc, then?

Not quite. It can be done.

There are two ways of weaving a series arc into your script. Here’s the first:

And then there’s a C-Plot in which your main character interacts with another character or set of circumstances that feels like it’s going to return.

Maybe it’s series of letters that arrive and reveal something – and make your protagonist react in some way. Does she shred them, or hide them under a floorboard? Or a neighbour keeps doing an odd thing. You can have a bit of mystery about it, as long as the main plot and the sub plot are barrelling alone, generating laughs and resolving in some way.

Maybe in episode 2 or 3, those letters turn into phonecalls – or the neighbour behaviour escalated.

And then letters turn into a visit in episode 4 or 5, which could be a sub-plot, or even a main plot for that episode.

And then in the series finale, episode 6, 8, 10 or 13, this long running plot is really brought to a head. The next phase of the overarching narrative can begin, or put the protagonist in a life threatening situation, or cause her question everything.

Series Arc #2: Break It Down

The other way of making your episode epic in scale but satisfying episodically is to break down their uber-quest into a series of manageable and achievable chunks. 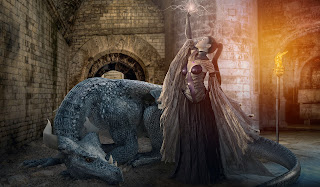 It’s the ‘telescopic’ approach that you find in video games. To get through level one, you have to kill the dragon.

To kill the dragon, you need the Enchanted Knife, guarded by the evil witch, who can be defeated with Amulet of Light, which can be found in the Mountains of Despair, that can only be navigated using the Map of Destiny.

So if this were a sitcom, your character needs to find the map (ep 1), then climb the mountain  to secure the amulet (ep 2), to defeat the witch and get the knife (ep 3) and so on.

You could have the hero face the dragon in Ep 4, only to discover it doesn’t work, or that the dragon is already dead, only to discover a greater foe who is harder to kill. Or in episode 2, getting the amulet requires it's own miniature quest which becomes an episode in its own right. I've only seen a few episodes, but it seems like this is way The Mandalorian does things.

Let's get back to reality.

Your character's big quest is to become Mayor of their town (for character-based reasons that will become clear in the series). Each episode is a step along the way, which may involve a last minute decision to stand and having to get 50 signatures by 7pm tomorrow.

Then there’s getting local press on side, having them show up at a soup kitchen where our heroine has volunteered. There are local hustings. There’s securing celebrity endorsements. There’s smearing the opponent, collecting opinion poll data and door knocking. Each of these could be an episode in its own right, with its own mini-goal and climax in a tangible event that can go wrong, or right in an unexpected way.

There’s plenty here for five episodes – alongside personal plots about family and friends - before getting to election day and a result – at which point, maybe they realise that they don’t want to win, and being elected would be a disaster.

The Long and Winding Road

The path does not have to be so clearly determined or defined, but it’s really helpful to remove doubt and allow the reader/audience to relax with a clear goal for your hero. It could be that in episode 1 your hero discovers they are adopted and they set out to look for their real mum and dad. That’s going to involve a trip to a public records office, and some detective work, travel and unexpected revelations. There is a clear goal at the end, but the steps along the way can have all kinds of twists and turns.

In fact, Series 1 uncovers the mother - but not the father. And that's series 2.

Those would be the two routes I would suggest for dealing with a series arc. The C-Plot becomes The A-Plot, and the Break It Down approach.

Iif you still feel that you want to write a half hour script that sets up some storylines for the main characters and doesn’t resolve any of them, then go for it. I think it will be frustrating to read, and won’t sell you as a writer for hire, but if this is the way you want to do it, you’re free to do that. My worry is that you’re writing a movie – or a novel – not a sitcom. And I think now is the time to be writing movies again. It seems that streaming services are now financing movies but that's one for another time.

If you're series about plotting your sitcom, register for my FREE 90-Minute Plotting Your Sitcom Webinar on Friday 21st May. Places are limited so sign up to the Situation Room for access to that webinar HERE. 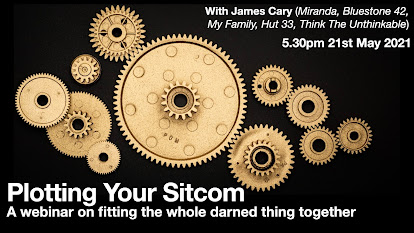