Why Would You Even Bother With Studio Sitcom? 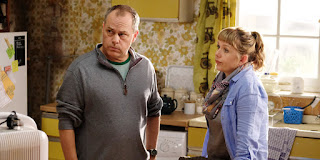 On a recent Sitcom Geeks podcast, Dave Cohen and I interviewed Pete Sinclair, who wrote Bad Move (right) with Jack Dee for ITV having previously written Lead Balloon together. Both of those shows are single camera shows, but Pete's previous sitcoms were both studio shows (Mr Charity and All Along the Watchtower).

In the podcast - and in a written interview on this blog here, here and here - Pete goes through just how difficult it is to make a studio sitcom work. There are so many factors to get wrong. And even if you have a great script, a fab cast and get it right 'on the night' of the studio recording, that is no guarantee that it will work on the small screen in people's living rooms.

I remember Paul Mayhew-Archer, a few years ago, telling the story of how Chalk ended up on TV - and how at the cast read-throughs and rehearsals, everyone just laughed and laughed and laughed. No-one had any idea how people would take against it - and it isn't clear why they did.

On the podcast, the story is told of how Steven Moffat, the writer of Chalk, was said to be so relieved when his next sitcom, Coupling, went down well since he was then confident that he would no longer go down in history as the clown who wrote Chalk.

It's so easy to get studio sitcom wrong. So why bother?

Good question. Especially given that you can achieve so much more with a single camera show.

The studio format can be so limiting. My show, Bluestone 42, could simply not have existed in a studio setting. And the pace of a single camera show can be so much faster. Look at Modern Family or 30 Rock for sheer rapidity of gags and development of story. And you can do achieve amazing or cute effects when you're no longer confined to a studio - like the Modern Family episode that is mostly all on FaceTime.

So the question remains. Why would even bother with a studio sitcom?

I only have one answer to that question:

In the Past
Firstly, look at the Top Ten Sitcoms from the 2004 BBC Britain Best Sitcom poll. Blackadder, Fawlty Towers, The Good Life, Yes Minister, One Foot in the Grave, Porridge, Only Fools and Horses, Open All Hours, The Vicar of Dibley and Dad's Army. Not to mention the next ones on the list: Father Ted, Keeping Up Appearances, Allo Allo, Last of the Summer Wine, Steptoe and Son, Men Behaving Badly, Ab Fab and Red Dwarf.

ALL of theses are studio shows. And you have to wait 'til Number 19 before you get to the Royle Family. And then you're back to To The Manor Born, Some Mother's Do Ave Em, and The Likely Lads.

Not only are these shows classics, they are remembered fondly, they are still available and still enjoyed and watched on UK Gold, DVD and YouTube. Dad's Army is still repeated on BBC2 and outperforms every other sitcom on BBC2 and Channel 4 almost every single week.

From America
Let's not forget how TV schedules have been propped up by hours and hours of American studio comedy. I've noted before how Channel 4 often starts the day with Everyone Loves Raymond, King of Queens and Frasier. That's a lot of studio comedy. Why, then, would people say it's out of fashion? I simply can't see how that's true.

In the Present
There is no doubt that BBC's biggest comedy hitters are studio audience shows, mostly obviously Mrs Brown's Boys, along with Still Open All Hours. Citizen Khan also does very respectable numbers. You may not like these shows, or assume they are just shows for old people and families and assume studio shows aren't for the young. But quite often the most watched studio sitcom on TV is on E4. And it's Big Bang Theory.

Look at the data. Studio audience sitcoms tend to do better. And the highly acclaimed nuanced single-camera shows tend to do worse in the ratings - or delight smaller numbers of people. We live in a world when you can have both. So why not have both?

So why would even bother with a studio sitcom? People love them. They enjoy their broad brush strokes (ooh, there's another one, Brush Strokes) and the feel of togetherness you get from the style of comedy and the studio audience laughing along. We're all included.

Of course, if you don't like the show, the sound of laughter is irritating, but so what? You don't like it. Walk away. There is no need to decry the form. But people do, and I'm afraid Ben Elton's right about the snobbiness that is around about 'trying to make people laugh'. (And you can listen to our discussion of Ben Elton's Lecture right here!)

Stephen Moffat, a great sitcom writer, walked away from studio sitcoms (see also Joking Apart). Can you blame him?

If you want to have a go at writing a sitcom, or your struggling with your script, get my book, Writing That Sitcom, which is available for the Kindle/Kindle App via Amazon.

If Amazon or Kindle is not your bag, it's also available as a bog-standard PDF here.

"first-hand information on what it's like to write for major British sitcoms and get your own one made." Amazon Review