In the last post, I gave some general advice on polishing up your script so that it's ready to send off and out and away. In this post, I'm just looking to expand one of those points with a really good clear example that cropped up when some of us were talking about sitcoms over on the Sitcom Geeks Facebook page. Here's what I wrote:

4. Check That Each Character Has A Unique Voice
Once you've established your characters, are you sure their patterns of speech clear and distinct? This will not only make the script more interesting, but will make it easier for the reader to distinguish the characters. Ideally, every single line of dialogue should be unique to that one character. Only that one character would say that thing that way, or make that joke. If another character expressed the same thought, they'd say it differently. Eddie and Richie in Bottom don't talk the same way. Nor do Blackadder and Baldrick, or Edina and Sapphie. Cover up the name of who's talking, and you should be able to tell who's line it is from the way they say what they say. 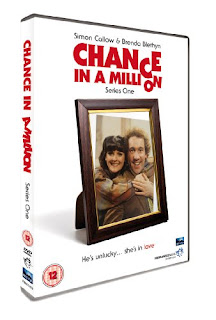 This is hard to do and has to be informed by character, but once you hear the characters talking in your head, you know you're onto something. If it's hard to generate those cadences, imagine a famous actor in the role - it's not cheating. In fact, it might help you fill out the corners or find something new. Or imagine a relative that this character reminds you of and is possibly based on. When I interviewed Eric Chappell for the latest Sitcom Geeks podcast, he was quite clear that Rigsby was based on one particular colleague. Make the most of that.

And here's the example that cropped up on yesterday that made me think of this and a really clear example of what's possible: The speech patterns of Tom Chance (Simon Callow) from Chance in a Million which have stayed with me for decades. The way he talks is simply extraordinary. See below. Never uses pronouns, articles or prepositions unless absolutely vital. Talks in bullet points. No idea why. Just the way it is. Something like that could work too. Didn't mean that Chance in a Million ran for years, but still remember Chance decades later. And that's something.

Here's an episode where it shouldn't be - on YouTube - but makes the point. Get the Chance In A Million - The Complete Series [DVD]