Earlier this year, I tried my hand at directing. It was a play I’d written a few years ago called The God Particle, which had already toured a couple of times. For the third tour, and with a new cast, I decided this was my chance to get a bit of experience doing something I hadn’t done before.

I wasn’t expecting to enjoy directing as much as I did, and in the end, I spent two very happy weeks with a couple of actors working through the scenes so that by the time the first previews came, everyone felt fairly well prepared.

The first two performances were to some truly tiny audiences in Twickenham and gradually we all grew in confidence. By the time we filmed the play as a DVD in May, the play had been performed at least 25 times. It was pretty tight.

I mention this for two reasons. One is that I’m subtley plugging the DVD which is out this month and available to pre-order right now. But here’s the main reason:

I’ve just been working on a studio sitcom and, as I’ve said on previous blogs, sitcoms filmed in front of audiences are more akin to plays than anything else. But even the ropiest, most amateur fringe play is rehearsed more than your average TV sitcom. Which is seen by millions.

For a start, there are normally six days allotted for pretty much everything: a readthrough, a rewrite, rehearsing, more rewriting, re-rehearsing, blocking, teching, pre-recording and then finally recording in front of an audience. The only head start you get is you might have a few minutes pre-shot on location. In short, it's terrifying.

But it gets worse.

The script might need a major rewrite. There might have been a readthrough a month earlier where it didn’t quite work and it turns out the rewrite is not much better. Or an actor might suddenly be unavailable and the script needs to change for very pragmatic reasons. Maybe it’s reading very long and there just isn't the time to overshoot.

If the script isn’t quite right for whatever reason on the morning of Day 1, it might take the rest of the day to fix it. The director may send the actors home, because there’s no point rehearsing scenes that are going to radically change, especially not with actors who are tired having been in studio all the day until 10pm or later filming last week’s episode. Either way, that’s a day of rehearsal gone. 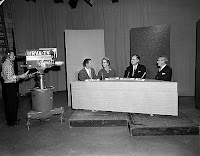 Day 2. More rehearsals and a few more changes. On days 3 and 4 the script might seem to be locked down, but lines are still being tweaked. You still might have to write a whole new scene, or cut a scene in half or blend two scenes together. But whatever you do, you’ll have to have it down because on Day 5 there might be pre-records for future episodes.

Day 6 is the day of the recording in the studio front of an audience. (Yes, they are real people laughing. Not sound effects) By now, each scene might have been rehearsed for three days or four days at the most. On Day 6, there’s a slow run through in the morning and early afternoon for the benefit of the cameras, sound, props and the myriad of people who seem to appear from nowhere. Then a technical run through. Even at this stage, lines might be tweaked.

The audience come in, and it’s recorded. On that first take, some actors might be saying new lines for the very first time. Whilst hitting their marks, and getting everything else right. And that’s it. There will probably be a chance to run the scene again. But there just isn’t time to go over it again and again to tweak a performances. And how it’s done on the night is how it will have to be for ever and ever.

The pressure, then, is enormous. And yet somehow every studio sitcom is done this way, and no-one seems minded to change it. This partly because the system works. That said it only works because we still have technical crew who’ve worked on this format for at least thirty years. Moreover, changing the system to allow more rehearsal time won’t really happen because it will just end up increasing costs, and TV budgets faced a constant downward pressure, especially at the BBC.

So how does this affect the sitcom writer? A script that’s been months in the making, and weeks in the rewriting, is blown through in six days and it can be quite alarming to see it all happen so fast. Or it may be even more alarming to see something assembled so slowly and picked apart and pulled around so quickly.

There are some things that you need to know as you go into studio week and in the next blogpost, we’ll look at those.