Often random background props make me laugh. Do I try to write these into the scene descriptions, or do I chat to the producer about how funny I think that novelty mug on the desk could be later on?

Good question. I’ve written a bit about props before. About the significance of props here and the mechanics of checking the props on set here and here. But these don’t really answer Jo’s question, which contains a couple of phrases that worry me. The first is the reference to the novelty mug. The second is the phrase ‘random background props’. Let’s start with the novelty mug. 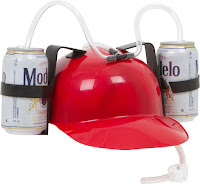 You probably already know this, Jo, and you're using shorthand but it’s just worth being sure about it. Things that are meant to be funny in real life are not funny in sitcoms. Amusing T-Shirts, “I’m Only Here For the Beer” hats, and novelty mugs are broadly off-limits in sitcoms.

It sounds a bit bizarre, but in sitcoms, your characters are not trying to do jokes. They are jokes. They don’t have the self-awareness to be funny in their own right. As a rule, they say things and do things that are unwittingly funny. Sheldon in Big Bang Theory doesn’t think he’s funny. He thinks he’s the smartest guy around – and kind of is. His ego is funny. His pride is funny. His lack of appreciation that’s its not good to brag about how clever you are is funny.

That said, if Sheldon tried to prove he had a sense of humour, he might well reach for standard ‘comedy’ tropes. But he would get them wrong, or try to improve them in some way, but in a way that says more about him than anything else.

Props should only really be an extension of character. Or part of a story. If your character is wearing a T-Shirt with a slogan, what does it say about them? Or how does it provoke a reaction? If your character takes a mug around the office, in what way does it augment their own unique brand of paranoia or idiocy? Or mean the start of an all mug war?

This whole area is related to why I’m normally against characters using standard comedy lines you hear in every day life like ‘I could tell you but I’d have to kill you’, or ‘Did I just say that out loud? There’s much more on that sort of thing here.

Now let’s turn to the other issue – and again, I’m sure you’re only using shorthand again, Jo, and I’m not picking on you (honest) 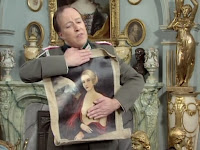 Some of the props from the old Croft and Lloyd sitcoms like Are You Being Served? and Allo Allo were really comic, and downright silly. The props can sometimes be a joke in their own right – and often become running jokes (eg. flashing knobs) But those were foreground props, to do with mannequins or escaping from the Germans. And they certainly were not random.

The main problem is this: If something in the background is meant to be funny, it’s distracting from the foreground. So one needs to be very careful here. 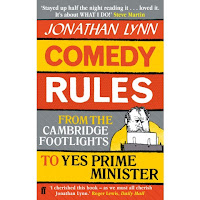 The best book I’ve read about writing comedy is Jonathan Lynn’s book on rules of comedy. It’s part autobiography and part how-to guide. Not only is he the co-writer of my favourite sitcom of all time (Yes, Prime Minister) and the writer/director of one of my favourite movies (Nuns on the Run), he’s also a theatre director. He really shows in his book how comedy is all about stage management, and directing the audience’s attention. Comedy is almost like a magic show where it is critical to ensure the audience sees what it needs to and is not distracted. Unless of course the distraction is very intentional.

There’s a really nice example of this in My Family (a show which people regularly forget got several millions viewers every single week – over a hundred times). In Series 4, when Kriss Marshall was still in at as Nick, a puppy dog-type who had a different job every week, there was an episode in which he became an extra. This triggered a hilarious scene in which Nick and his fellow ‘acting extras’ practised their background acting while Ben and Susan, in the foreground, were talking about something or other on the sofa. It was critical they didn’t say anything of any importance or plot significance because the audience weren’t listening to a word they were saying. 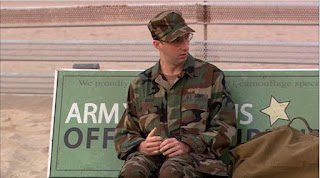 In your script – and in your sitcom – you need to be sure where your audience is looking and not looking. The only time background jokes can really work is in between scenes or moments. The camera can linger on them for a moment and then move on. Or they’re so subtle and in the background that is very likely the audience will miss them and it won’t matter. This is the sort of thing Arrested Development did. While Arrested Development is a masterpiece of joke density, a personal favourite, and bears much repeat viewing, it never got much of an audience. Perhaps this is an indication as to why.

You can’t do two different jokes at the same time. You can do a joke that works on a few levels, but you can’t do one joke in the foreground and another in the background simultaneously. The audience won’t know which to look at, or laugh at, or know which is more important. They will become confused. And if I have one catchphrase it’s this:


Confusion is the enemy of comedy.

Stuffing a scene with background jokes also could stem from a lack of confidence in the foreground jokes. The audience should really be transfixed by your characters and the story.

Having said all of this, there’s something about animation that means you can get anyway with lots of background jokes. I think that’s because the simplicity of the picture means that your brain can process everything faster and switch between background and foreground. That’s my theory, anyway.

As far as writing the scripts goes, put in whatever you think is necessary. In the first instance, focus on using props to tell your story and develop character. They really can be tangible ways of doing that.

Writing about props in scripts is tricky. You don’t want loads of action lines getting in the way. It’s hard to write that stuff economically and accurately, especially as it won’t show up in the show the same way as dialogue. Like most of things, it just takes time to do well.

Thanks for you question, Jo. I hope that helps. Keep 'em coming.