What Has Happened to Geoff and Lynette?

I'm still thinking about possible stories for Geoff and Lynette, who are the key protagonists in a sitcom I'm developing on this blog, called Third Time Lucky. In the last blog post on this subject, I wrote about putting your characters in various situations to see how it goes, before committing to your characters fully and fleshing things out. I used a technique for generating random stories just to get things going. I left unfinished. I'm finishing it below, just to show my working. It's not terribly inspiring at the moment, but it might show what the kinds of things go through my mind as I'm developing characters and sitcoms. If this list is baffling, look at this link first.

Chiropodist (or Chiropractor?) – Geoff has stinky feet. Or maybe Lynette does and she’s very ashamed of that. Or not ashamed enough? For chiropractor, see Healthy (below)

Damsel in Distress – Geoff is not chivalrous. But he’d like to be. Maybe he doesn’t want to do something chivalrous because he thinks Lynette wouldn’t like it or would find it patronising. Her old mates from Greenham common would be appalled. But when he confesses this, Lynette is surprised and appalled. How could he have misjudged her – when they’ve been married? Twice?!

Elephant – There’s an elephant in the room. Something about their relationship – or one of their children, maybe? – that they never mention. Or maybe one of their kids confronts Geoff and tells him that he’s a hoarder. Which he kind of is.

Giraffe – Geoff has been hiding something on a high shelf where he knows Lynette won’t even see it, let along reach it. Until spring cleaning day. Lynette gets out the step ladder – and to avoid her from finding the ‘thing/macguffin’, so Geoff gets involved in the cleaning, much to Lynette's surprise and delight. But he falls off the ladder (which he has set up incorrectly), and hurts himself – and then has to sit on the sofa helpless, while Lynette climbs the ladder to continue cleaning and finds ‘the thing’. When she opens it, all hell breaks look, but not in the way Geoff was expecting.

Health – Attitudes to health and medicine is a tricky one because Lynette could be probably pro-complimentary medicine, or she could place so much faith in nature that she believes the human body essentially heals itself. Or maybe Geoff is against all medicine and won’t take a paracetamol unless he’s dying.

Another health story here is that one of them might have a significant health scare – which really does focus the mind and force you to work out what’s precious. Geoff or Lynette has a scare, and then draws up a bucket list that is ludicrous. This could be a trigger for them both drawing up bucket lists to make sure they don't waste this part of their life, while they do have the means and the health to enjoy the world. And the lists are very different and they realise they want completely different things. But, somehow, they still want to be together. That made me think of this:


Igloo – There are disputes about the level of the thermostat. Or, better, the boiler is broken and Geoff is trying to fix it himself, but failing. All the while, Lynette is freezing, so Geoff's unwillingness to get help is impinging on the one he loves. Will his love of tinkering or love of his wife win out?

Janitor – Isn’t it about time Geoff tidied up his collection of old technology that is the garage? If so, what does he find?

Knight – subliminally, I think I wrote ‘Knight’ because I was still thinking about the Damsel in Distress, so I'm going to pass on this one. 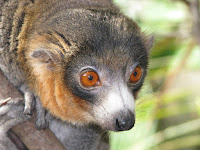 Lemur – Lynette and Geoff have to look after a lemur for a friend who’s going on holiday. Geoff is not keen, but Lynette is pro-nature and animals so agrees. Geoff is struggling with a piece of technology, maybe, and when the lemur escapes, it shows that the technology is easy enough for a monkey/lemur to operate. (Lemurs aren't technically monkeys, are they? Or are they?)

Mauve – the living room (or bedroom?) needs repainting. Or the outside of the house. What colour should it be? And how do they decide? What different things do they associate with colours? Through the course of this, we see how incompatible they are. Something as trivial as this leads to the need for mediation.

Notebook – a note in a pad is found and heavily misconstrued. As a rule of thumb, I tend not to like stories like these where a character gets the wrong end of the stick because it means the plot is based on ‘lack of information’ rather than purely character. Sometimes, the partial information confirms a prejudice, which can be okay, but overall, I try to avoid these sorts of stories. This sort of thing could work for a beat, or scene. Geoff finds a note left by Lynette, which makes it look like she’s leaving him, when she’s actually nipped to the shops. Geoff is devastated – and maybe moves on a bit too quickly and Lynette returns, Geoff is surprised and it triggers a proper story, or feeds into something else.

Where are we?
From the list we've got, I like bits and pieces. I like the boiler story, because Geoff's passion to fix and tinker affects his other passion, his wife. I like the clash of bucket lists. I like Geoff being called a hoarder, and having to prove he's not, whilst being in denial. I like the falling out over the colour of the house. It's a common domestic dispute that could escalate.

Overall, it's still early days. It does feel like there's a show here, which is encouraging. But at the moment, lots of the stories are feeling a bit trivial and I have no idea what a pilot episode could be about. I think I now need to go back to the characters and interrogate them, which I wrote about here. Maybe I do need to figure out a bit of backstory (warning! Backstory! Handle with care) and work out where the primary battlegrounds are. So that's a job for next time.
Posted by James Cary at 12:39