A few weeks ago, I posted details of my favourite British sitcoms of all time. These are not shows that I necessarily think are technically the best, or most popular, but shows which I love, highly rate and made a lasting impact on me. My favourite is Yes, Prime Minister.

I thought about doing the same with American sitcoms, but realised this isn’t as straightforward as it seems for many reasons. The first is that my list isn’t very original. The shows I like and admire the most, and that have shaped me and my thinking about situation comedy, are pretty much the same as everyone else’s: Friends, Frasier, The Larry Sanders Show, Arrested Development and my favourite of all American sitcoms, Seinfeld. And what can I say about these shows that hasn’t already been said? Not very much.

The other problem is that my judgment on American sitcoms is very patchy and affected by my circumstances, age and what British TV channels chose to import in the last forty years.

There are loads of classic sitcoms I don’t think we ever got here in the UK, like Murphy Brown, Family Ties and All in the Family. (The latter was based on Til Death Do Us Part, which was a British show anyway). And there are classic sitcoms that were just before my time and may well have been repeated in UK but I never saw them, like I Love Lucy, The Honeymooners,The Bob Newhart Show and Soap.

Then there are classics that I first saw when I was too young to fully appreciate them, like M*A*S*H, Cheers and Taxi. And then there were sitcoms that I liked because they were on and I was young and fairly easily pleased, so that would include shows like Perfect Strangers, Head of the Class and Different Strokes. Included in that should be Golden Girls, The Cosby Show and Happy Days, which I’m pretty sure are important shows and classics. But would they make it into my top ten? I’m not sure. Maybe. 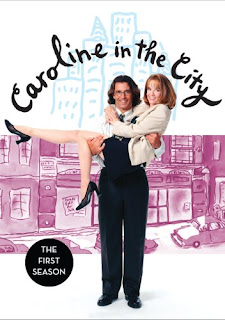 Then there are sitcoms that were perfectly enjoyable and I really got into and happened to catch me at time when I watched a lot of TV and a UK channel decided to broadcast it. Like Caroline In The City. Yes. I really got into the will-they/won't-they unrequited love storyline of Caroline in the City. What of it?

Then there are other shows that looked good but I never got into them like Spin City, Mad about You, and My Two Dads.

Then there are the sitcoms I really like now, but have no idea if they’ll stand the test of time and be deemed classics like Parks and Recreation, Brooklyn 99 and The Goldbergs. I also love Modern Family, which I’m pretty sure is going to be deemed a classic, so should that be on my list? Probably.

So, what shows remain? One is a comedy drama, which, if we’re being technical about thing probably isn’t a sitcom: The Wonder Years. There was a show that just nailed a stage of life – being a kid in an adult world. All the while I was watching when I was fairly young myself, I was aware that this show was a class act. But it’s not a sitcom. So it's not on the list.

Then there’s The Simpsons. Is that a sitcom? Yes. It must be, but it hardly seems fair putting it on this list because it’s been hailed, for good reason, as the best TV show of the 20th Century. But it’s an animation. And given there are no rules and it’s my blog, I’m excluding it. 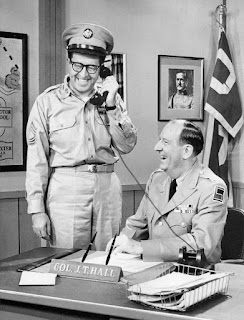 The Phil Silvers Show aka Bilko. Much unloved and overlooked in the USA, but broadcast by BBC2 in the 1980s and 1990s in the daytime. The show is an astonishing mix of great writing, pacey directing and a central performance that may have been equalled, but never better: Phil Silvers as the grasping, gambling, slippery but loveable Sergeant Bilko. So lovable, he became Top Cat. And was this a boutique show? Distilled brilliance that couldn’t be rushed, like the 24 episodes  of Blackadder? (18 great episodes if we’re being honest about Series 1)

They made 142 episodes of Bilko. 142 episodes in 4 years. FOUR YEARS. From 1955 to 1959. (Winning three consecutive Emmys for Best Comedy Series in the process) That’s 60-odd years ago. And it’s still funny. Really funny.

Okay, then. Since we're here, let’s just knock out a top ten of my favourite American shows in no particular order: Friends, Frasier, The Larry Sanders Show, Arrested Development, Seinfeld, Modern Family, Cheers, MASH, The Phil Silvers Show and, what the hell, Caroline in the City.

Yes. Caroline in the City. Deal with it.
Posted by James Cary at 15:06