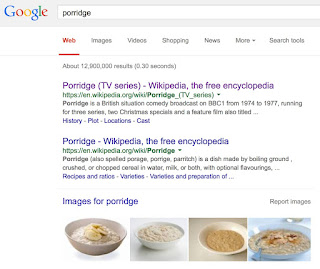 How good and well regarded is Porridge? Here’s how. Google it. The TV show comes out ahead of the food.

Porridge is an all-time copper-bottomed will-be-repeated-forever classic. And quite rightly. It's my third favourite (British) sitcom ever.

I have a theory on sitcoms, that they need Characters, Conflict and Confinement. Plus Casting is crucial. Porridge gets all of these exactly right from the start. Okay, not quite from the start. There was a pilot in which Fletcher was a little darker and more menacing. But when the series started, it was an instant classic. Here's why: 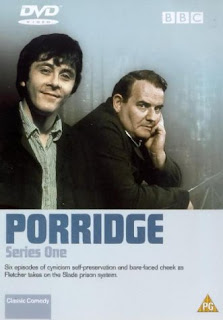 Norman Stanley Fletcher is a superb character that we’ve not really seen before – or since. Somehow, Clement and Le Frenais created a character who is a selfish every-man-for-himself criminal who knows how to survive inside – but is also likeable, funny and always able to win little victories. And we have Godber, a repentant criminal who made a mistake and is paying the price. Fletcher’s only regret is being caught, and yet we still love him. Add to this a stern, suspicious Mr Mackay and a soft, trusting Mr Barraclough and you’re already in great shape with four superb characters with very different perspectives on life.

I’m not the first to spot this, but you’ve also got a family right there. Stern Dad (Mackay), Kind Mum (Barraclough), Worldly-wide Older Brother (Fletcher), Innocent Younger Brother (Godber). Given we're hard-wired for families, this kind of arrangement gives you a really good chance of success.

Confinement
You have ultimate confinement: prison. And with prison comes a world of rules, regulations, dos and don’t: perfect sitcom territory. Lots of measurable and trackable successes and defeats. Lots of chances for pettiness and sticking it to the man. Plus you have uniforms, where it’s easy to see who are the good guys (the bad prisoners) and who are the bad guys (the good prison wardens).

Conflict
Fletcher is clearly the epicentre of the show, and his relationships with his cell-mate, Godber and his nemesis, Mr Mackay, are crucial and unavoidable. He has a love-hate conflict with Godber, whom he wants to help, but also has to put up with in very close proximity. Plus Godber asks Fletcher difficult questions, and challenges his criminality and cynicism. It’s a beautiful, perfectly calibrated relationship.

Then there’s the relationship with Mr Mackay – a game of chess where the pieces are tins of pineapple chunks or rolls of toilet paper. They are both at the top of their game and have a begrudging respect for the other. And we love to watch them fight it out every week.


Casting
It really helps if you cast one of the greatest comedy actors this country has ever produced. Ronnie Barker is up there with Peter Sellers and Leonard Rossiter. Richard Beckinsale was pretty good to hold his own, as he did along side Leonard Rossiter in Rising Damp (for which there is sadly no room in my Top Ten, but gets an honourable mention here. I went back to it a few years ago, and it really holds up well. And Rossiter is just stunning. To be Rigsby and Reggie Perrin is astonishing)

And on top of all the above, the writing is simply first class. Every line counts. Every moment is full of atmosphere, character and meaning. And lots of jokes, little ones, big ones and very memorable ones. It remains a joy to watch. And it's great sitcom homework. In fact, it's a masterclass.

For more on Character, Conflict and Confinement, have a look at Writing That Sitcom, available for Kindle/Kindle App now in UK, USA and Australia.