I think it’s become a bit of a given that someone describing the dream they had last night is intrinsically boring. Dreams feels so real and personal. But there is wide acceptance that you just can't convey that in a satisfactory way.

Stage directions can sometimes feel like trying to describe your dream – and about as pointless, given that anyone reading a script, from actors to producers to commissioners, notoriously don’t bother to read stage directions.

How should we approach actions lines?

Exactly the same way as you’d approach dialogue. Allow me to explain.

Treat Stage Directions Like Dialogue
I don’t mean that you should use the directions as your voice or monologue to the reader. That’s cheating. Especially when you convey something that isn’t visible on the screen, or said in dialogue.


Eg. TOM turns to his most hated younger brother, JOHN. He’s never forgiven him for being so selfish that he drove their mother away.

Maybe in the first page of a pilot script, you might get to do a tiny bit of that, just to establish who’s who so they don't have to refer back to a pitch document. You might get away with:

All the other stuff needs to be conveyed in dialogue, tone, story, body language, and/or props. The action lines are not a shortcut. They are setting the scene and describing action. But where you stop?

Frequently earlier than you think. It is easy to write seven lines of continuous action in one dense paragraph. When you have one of those, you should be every bit as worried as if you’ve just written a character one dense seven line speech. Are you sure you want to do that?

People don’t speak uninterrupted that long very often. And even if they do, you want to be very careful about writing a speech that way. The old ‘start later’ or ‘finish earlier’ rule applies. It’s why every movie set in a high school or college, has a classroom scenes which starts with the teacher talking for five seconds before bell rings.

On the rare occasion a scene starts with a class starting, it turns into a dialogue, not a monologue, fairly quickly. Or the scene is totally derailed in some other way.

In the same way, you need to think twice, even three times, before big blocks of uninterrupted action, especially in a sitcom which is normally a talkie format. The expectations of tempo are completely different from movies.

Setting the Scene
The most obvious place to fall into this trap is the first page or two of a pilot script in which you’re setting a scene. Maybe you’re describing the diner or office where our characters are going to be spending the next seven years, all being well. Fine. We don’t need all the details now. The show will not ride or fall on how well you’ve described the background.

The characters are the key. Get them on. Get them talking – and give us the minimum amount of information so that we can follow what’s happening and who these people are. 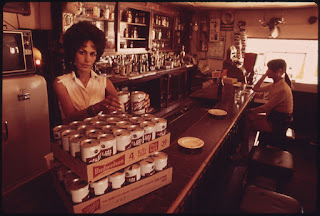 If your character is a waitress who thinks she’s too good for the grim diner she’s working in, describe the diner in a line (eg. A diner in serious need of redecoration). Describe the waitress in a line (eg. VERONICA looks immaculate, her hair perfect and her apron spotless). And get her talking – and the mismatch between her surroundings and her appearance will be explained. We'll get hooked onto the character, and in time, you can tell us all about the jukebox or coffee machine, when it's relevant.

How much information is ‘the minimum amount’? I would argue it’s different in a movie script from sitcom scripts. In movies, you can build slowly, introduce a location, a texture and tone before anyone’s said anything. You might not have a line of dialogue for a few minutes. Fine. A bit of mystery is okay. Things can be unexplained. The viewer can be intrigued. They’re not going to walk out in the first ten minutes. You get that free pass at the start in movies.

In a sitcom, especially a studio sitcom, you need to get the funny people on fast. And you need to explain your situation and set-up so the audience is not confused. Because, as I say many times on this blog, confusion is the enemy of comedy. But any scene description that can be deferred probably should be.

Alright, Break It Up
Sometimes you’re stuck with needing to have seven or eight lines of action. In that case, look for ways to break it up into more manageable chunks so that it doesn’t look too uninviting. Normally, I try not to have more than three lines of action without a line break or a new paragraph. You might also be able to have a single line of action – especially if it’s action is a physical joke, or a single thought. Which is why I wrote 'Somewhere' above as a single line. To break it up as well as land a joke, albeit not a very good one.

In short, make sure that every line of action needs to be where it is, so that the script is as inviting to read as possible. And as easy to finish once they’ve started.

Even then, some people still won’t read all the action. And that’s fine. But if, after three pages, they’ve already decided they love your script (as they well might if you’ve got a strong start), you’re literally in business.
Posted by James Cary at 19:54