How to be Averagely Successful at Comedy

I’ve recently finished Dave Cohen’s highly readable book, How to be Averagely Successful at Comedy. I recommend you rush out and buy a copy.You can order a copy from Amazon here or you can stick it to the man and order it from Dave's local book shop here.

I have to declare an interest here. I know Dave personally, mainly through running comedy writing workshops with him. But you know what? I thought I knew the guy, until I read this book, which is a real eye-opener to the comedy business. 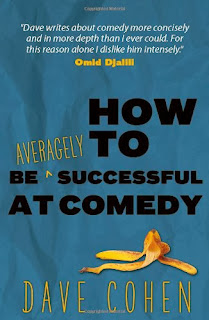 So in the interest of balance, here’s my problem with the book: The title. Dave has made a living out of comedy for decades, writing for Have I Got News for You, Horrible Histories, Not Going Out  as well as numerous radio shows and his own Fringe shows. And he was one of the original Comedy Store Players. All of the above do not make him ‘averagely’ successful, but ‘quite’ successful, at the very least.

But this is why the book is so refreshing. Success in the comedy business often doesn’t feel like success. It feels like scraping by. Just making a half-decent living to feed your family is a struggle. Surviving the quicksand that is the comedy industry takes immense effort, as well as talent and a bit of luck. And since comedy is such a personal art, it means pouring your heart and soul into every piece of work. And doing that year after year takes its toll. This book reflects that difficult journey.

There’s plenty of joy in the book too. Dave tells the odd success story, shares the feeling of being on stage when its all going well – and how he was the man to coin the phrase ‘Comedy is the new rock and roll’.
The book is also packed with lots of useful practical advice on building a career, making your own comedy and how the comedy industry really works. There’s also loads of technical advice on writing all kinds of comedy.

In short, this is not your average ‘how to’ book about comedy – it’s far too personal, practical and prophetic. I heartily recommend you seek out a copy, take it into a quiet corner and devour it.

Dave and I are doing some more of those comedy writing worshops on the 14th and 21st March. More information here.
Posted by James Cary at 11:09