There's a lot of talk about the God Particle at the moment. They've found it. Or at least they think they might have found evidence that suggests they may have found it and it turns out they were right about Physics generally all along. Which isn't bad.

Now, I know what you're thinking. "If only there was some kind of theatrical comedy called the God Particle that I could see in London towards the end of August." Good news. I've written such a play. The God Particle is a romantic comedy about a vicar and a quantum physicist who are brought together by circumstances, and they bicker and argue about life and religion like Maddie and David from Moonlighting. It's takes place in the village of Threepiggs and is based around a quotation by one of my favourite writers, GK Chesterton who said "The point of having an open mind is the same as having a open mouth: to close it on something solid." This sounds witty but is it true? The scientist would argue not. What is it to have an open mind? Does that mean never believing anything? The play looks at all that. With jokes. And lasts about 75 minutes. Do come. 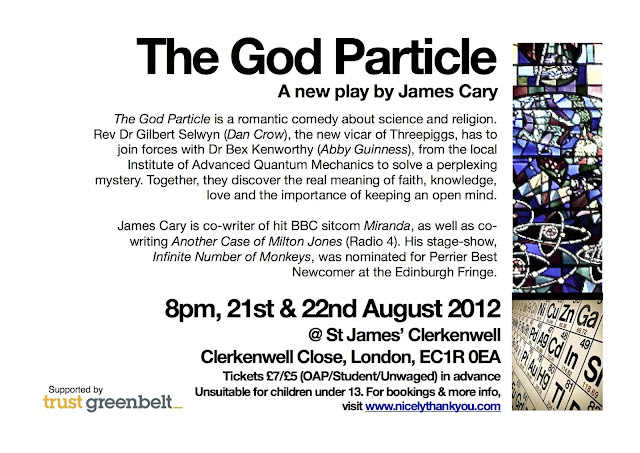