Stand Up and Deliver by Andy Kind 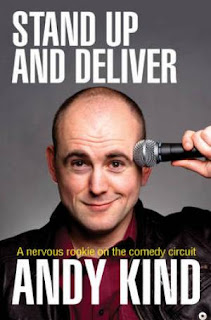 Let's be honest. There aren't all that many books out there about comedy - certainly not British comedy. So when one comes along, it's always worth a look. Andy Kind has written a nice one called 'Stand Up and Deliver'. Not a blindingly original title, I guess, but it does the job. It's about his first year doing stand-up comedy and appears to be a brutally honest account of that year, the euphoric highs, and the chronic lows.

Again, let's keep it transparent. I know Andy a bit, although I've never seen him do stand-up. But here's the thing. I read the book and it made me laugh. Out loud. Quite often. This is a good thing, and therefore a good book. The book isn't a Stewart-Lee-style skewering of the comedy industry and the huge flaws within the stand-up circuit, new act nights and all that stuff. Andy deals with all these things in a very jokey way, with loads of gags thrown in. Like all these things, some hit, some miss. But the hit rate is pretty high. It made me think Andy could cut it in a writers room, gagging up scripts and throwing ideas in. Maybe he's more suited to that than stand-up. But not having seen his stand-up, I couldn't say.

The only other thing that me be bothersome for some is that Andy is a Christian, and is honest about that in his book. The book's publisher is a Christian company. None of this concerned me as I'm a fellow God-botherer. To leave it out, though, would be less than honest of him, and the book is nothing if not honest.

Overall, the book is well-worth a look, especially if you're dabbling in stand-up or live comedy performance. You can get hold of it and read other reviews over here.
Posted by James Cary at 14:47