Occasionally a movie throws up some comedy characters that are funny in an enduring way. The most obvious example would be M*A*S*H, which began life as a film (based on a book) and become a far more successful comedy, running for many years.

Recently, I've stumbled across another example which contains a cast of superb comedy characters that feel more sitcom-based than anything else. Adrian Cronauer (Robin Williams) and Lt. Steven Hauk (Bruno Kirby) from Good Morning, Vietnam. This, for me, is an underplayed relationship in the film which inevitably has to be about the war and all that stuff. Also, Robin Williams is stunning in the film and almost obscures the film with his fast-talking.

But the dynamic of the movie is very sitcom. Cronauer is brilliantly funny, anti-establishment, modest and junior; and Lt Hauk is painfully unfunny, pro-establishment, totally unaware and senior works brilliantly well. You can imagine them in dozens of alternative situations week after week in which they clash over anything and everything. Imagine them co-presenting a radio show; or doing the entertainment for the Colonel's daughter's birthday party. I'm smiling just thinking about those things. 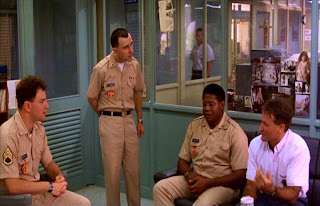 It's worth noting that sitcoms - in order to be successful - need these crackling and fizzing relationships between characters who just drive each other crazy. When it works, and you're writing it, the characters just talk in your head. As the writer, you just feel like the guy noting it all down.

If your show doesn't feel like it's heading in this direction, put on the brakes and rethink. And take a moment to be reinsipired by something great. And then go back to your situation and rewrite, rething, replot and replan until these clashing characters emerge.