In Praise of Radio

There is no doubt that TV is where it’s at. Every new sitcom that comes out is reviewed by all and sundry, generates a thousand tweets and opinions.

This happens for a few reasons. The first is that we love sitcom and, as a nation, there aren’t that many on any more. Therefore any show purporting to be the next Only Fools and Horses or Blackadder is pounced upon like a piece of ribeye steak thrown to a starved lion. Secondly, television is an arresting medium. The images are so powerful they create an enormous impact on the viewer. Then, the next day, on the radio breakfast shows, presenters talk about last night’s television and begin the national conversation.

The aspiring comedy writer, then, could be forgiven for overlooking radio. But they’d be missing out on acres of opportunities.

A Great Place to Start
Many people say that radio is a great place to learn your comedy trade, pointing to all the writers who spend many years in radio before going on to television. This is true enough. Most writers over the age of 35 have a long radio CV, which will almost certainly include the mothballed Weekending and the defunct News Huddlines.

Plenty of shows were indeed tried out on BBC or discovered there – most recently ones being Miranda, Little Britain, People Like Us and a bunch of others. Going back some time, the classics practically defined the genre there, as the nation stopped for Hancock.

Also, there are open door shows on the radio designed specifically train up writers into the discipline of gag- and sketch-writing. I myself started as Weekending was finishing – and had the occasional bit on The Way It Is, sharing a table with likes of The Thick of It’s, Simon Blackwell. And this experience gives a fledgling writer a big boost in terms of morale. There’s nothing that can beat the buzz of hearing your joke(s) going out on national radio – especially if you wrote the joke that week. And especially if the joke is actually funny.

Some time later, I had the privilege of conceiving and script editing four series, Recorded for Training Purposes (yes, I did come up with name, how sweet of you to ask), which was conceived as show to encourage and train new writers. We found plenty. Now there’s BBC7s Newsjack. These shows simply don’t exist of television.

A Great Place to Write
All above is true enough. Radio is a great place to start. But I see radio as an end in itself. It’s a great place to write. It’s interesting that a number of writers come back to radio because of the creative freedom it affords. One notable example is Andy Hamilton – who wrote the wonderful Million Pound Radio show with Nick Revell from 1985-1992. Then had his monster Channel 4 hit Drop the Dead Donkey – but comes back to radio to do Old Harry’s Game and Revolting People, two shows that couldn’t really happen on television. And even while he is writing another monster TV hit in Outnumbered, he comes back to radio again and again.

What is it about radio? The medium itself is certainly intimate. If TV is like being yelled at, radio is like a pleasant side-by-side conversation. It’s more like reading a novel, where the pictures are in your head – where the special effects are so much better, and far more memorable.

But the business of writing for radio is wonderful, especially compared to television – where there are so many people in the way. In radio, it’s mostly you, the producer and a broadcast assistant. There aren’t really any execs or suchlike floating around making your life more complicated than it needs to be. The audience of two hundred or so will keep you honest on that front. And then there’s the cast.

A note here about casting, which is so much easier for radio, since it requires comparatively little rehearsal, no make-up and no line-learning. Assembling a really good cast is comparatively easy. Through radio, I’ve had the thrill of working with some superb actors who have significant profile. Apart from that, they have real experience and talent and can really lift the script with performance.

The Script is King
But if the characters and jokes are not on the page, they won’t appear. Because the process is so pared back, the script is everything. In television, the writer can feel like a small part in a big machine – and this can tempt one into thinking that the script is only part of the process. It isn’t. The script is king. Radio teaches you that in a hurry. There’s no hiding in radio – and so as a radio sitcom writer, you learn fast. If the show misfires, it's unlikely to have been a technical fault. Most likely, it's a script-error, a string or duff jokes, a confusing plot turn or a badly defined character. ie. your fault.

I'm very grateful for having had this education. Ten or twelve years, I was very hungry to get a sitcom on television. But now, having written 45 episodes of half-hour radio scripts, and co-written another 26 with Milton Jones, I now know how hard it is, how much work it is and what to expect. Now, to have my own solo TV show would be rather scary. Back in 1999 I was no way near scared enough.

Even better, the opportunities are there in radio, especially Radio 4 – which puts out comedy every week night at 6.30pm, and often at 11pm, and 11.30am. It’s at least 12 half hour slots a week, 52 weeks a year – to say nothing of the 200+ afternoon plays that are on every year. It’s not like television where there might be two or three sitcoms on per week across four BBC Channels, if you’re lucky. And everyone is scrapping for those slots. You're competing with Paul Whitehouse, John Sullivan and the guy who came up with Friends. On the radio, it always feels like you’re in with a chance (even though I’ve just had two shows turned down in the last Radio 4 offers round!).

A Great Place to Fail
The fact that radio is lower in profile, as we said at the start, is a good thing. And this makes it a great place to fail. We all fail as writers – and even if the scripts seem funny and the cast seem right, the show might turn out to be a bit of soupy mess. Success is all very fine and large, but failure is your friend. You learn through failure – humility as much as anything else and that is no bad thing. 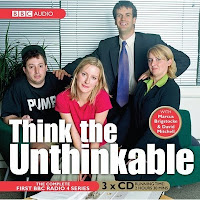 A while ago, I had a nice show running on Radio 4 called Think The Unthinkable, starring Marcus Brigstocke and David Mitchell, among others. I tried to get a new show up on its feet called The Pits, set in fictional British Opera Company. It starred Paula Wilcok, Phil Cornwell, Lucy Montgomery and John Oliver (yes, that John Oliver). I thought it was okay and could have developed into something – but Radio 4 didn’t like it. The press completely ignored it and it vanished without trace. Google it. You won’t find it. It’s not even on Wikipedia. But on TV, the press, I’m sure would have torn it to shreds. But then again, it would never have happened on TV because there probably weren’t any slots.

It’s all happening in radio, my friends. It's a great place to start, to work, to learn and return to when you're rich and famous because it's a lot of fun.
Posted by James Cary at 18:19