They're Nice And All, But We Don't Care

And so we reach the age old debate about 'likeable'.

I've heard it said (either by Goldman or Long) that networks want a Mickey Mouse. But comedy writers want to write Bugs Bunny. Let's not beat about the bush on this one - Mickey Mouse just isn't as cool, as funny or even as 'likeable' as Bugs Bunny, who torments, frustrates and bullies his assaillants and walks off with lines like 'Ain't I a stinker?'

Bugs is cowardly, brutal and mean. And yet, as a child, every time cartoons came on, I would cheer if it was Bugs Bunny and switch off mild-mannered-middle-of-the-road Mickey Mouse. Unless Donald Duck was around who as, at least, a comically hyper-charged ball of rage that would at least pass the time. 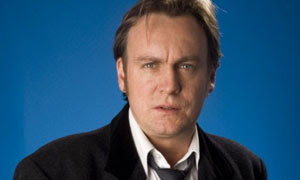 Let's keep going with this. One of the most appealling characters of British TV of the last ten years is Gene Hunt - a sexist, homophobic, xenophobic throwback to the bad old days of dodgy policing. He was literally head and shoulders above all others in that show because his character was larger than life in every way. Five series later, he's bigger than ever.

Previously I've blogged about the wonderful Damned United (here) in which the incorrigible Brian Clough is portrayed, a man who got under your skin and intentionally set out to annoy people - like Gregory House, MD. Or, for that matter, Gordon Ramsay on his TV shows.

And yet, in a way, we care about Bugs Bunny, Hunt, House and Clough - even though they are sadistic monsters. In pure sitcom, we have the likes of Victor Meldrew in One Foot in the Grave. In 30 Rock, we have Jack Donaghy and Tracey Jordan who are both rich and arrogant monsters in their way.

In my own limited experience, we have Penny and Tilly in Miranda who say and do outrageously unlikeable things, but we love them all the same. In writing Hut 33, I created a character called Professor Charles Gardiner, ultra-conservative Oxford don who was on first name terms with Rommel and Von Ribbentrop when war broke out. Played by the delightful Robert Bathurst, he often had the best jokes and zingers, and was a lot of fun to write for. In fact, the most popular character of that show was the Polish psychopath called Minka, voiced by Olivia Colman. She always brought the house down with her tales or threats of sustained and imaginative physical violence.

The common stereotype of the TV Commissioner is that they want someone 'likeable'. Or think other people think they want someone 'likeable'. This is sadly often true. But let's not confuse 'likable' with 'engaging' or 'absorbing' or 'charismatic'. The audience and the commissioner want the same thing - characters they keep coming back to. We need compelling characters, not necessary likeable ones. Miranda is very likeable. So was Del Boy. But Gregory House isn't likeable. He is an utter jerk, and cruel to anyone who shows love or affection for him. And yet, I've seen every single episode up to the middle of Series 6.

Conversely, the problem of Episodes is that we have a perfectly likeable couple at the centre of the show - but we don't really care about them, as I said here. They're nice and all, but we don't care.

Ultimately, we live with a paradox. We are able to love people we dislike. (Think of your own family). The skill, the trick, the art of writing is to make characters compelling, so that we have sympathy for them. It make be that we make them Mr Nice Guy. It may be that we can relate to them. Or it may be that we understand them, see the world through their eyes, but realise we would dislike them if we met them - but we just can't look away. eg. David Brent, Captain Mainwairing, Victor Meldrew, Tony Hancock.

It seems surprising that writers keep being asked for 'likeable', when that is not, ultimately, what the audience, the commissioners or any of us want.

Of course, Mickey Mouse made Disney and lots of other people hundreds of millions, so we can probably ignore all of the above.

But come on, who wants Mickey, Minnie, Donald and Pluto, when you can have Bugs Bunny, Yosemite Sam, Foghorn Leghorn and Elmer Fudd?
Posted by James Cary at 10:27