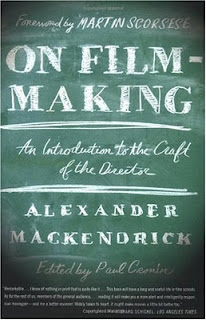 I am currently reading a book about screenwriting that I can thoroughly recommend - On Film-making by Alexander MacKendrick. It's so good that I'm telling everyone about it and taking it with me everywhere I go. I'm only a third of the way through, and I'm rationing myself, sipping it slowly so I savour every drop of it. (Isn't it dreadful when you finish a wonderful book quickly and realise you can't go back?)

To put the book in context, MacKendrick knew about movies. He only directed Whisky Galore! (1949), The Man in the White Suit (1951), The Ladykillers (1955) and Sweet Smell of Success (1957). Soon after, he gave up directing to become dean of the California Institute of the Arts. He died in 1993. But his articles, notes and lectures survive and are in this book. It oozes confidence on the subject, within tipping over into hubris. He freely admits his own shortcomings and mistakes - both in film-making and teaching. And the writing is pleasingly louche.

The book is full of short articles on specific subjects and crafts within filming-making. Lots of it is about writing, storylining and script-editing. It is, in short, a must. I can think of no other book that is 'a must'. (You could sum up McKee's bafflingly expensive paperback in three words: 'Story is character'. Or four words. 'Story is character. Kerching!')

Naturally this book is out of print in this country - otherwise the Brits might get hold of it and get good at screenwriting. But it's on Amazon's marketplace. Go find. Buy. Read. Re-Read. Learn. And do.
Posted by James Cary at 16:38