I was in a meeting recently when someone who makes more money than me told me not to be cynical, and to hold fast to original ideas and not make my ideas fit into holes that I may have perceived commissioners and controllers think they have in their schedules. It is infuriating to be told this - not least because they were right and one needs to hear this now and then. Even though holding to an artistic vision or a central idea doesn't put shoes on the feet of your children, it is ultimately all writers really have. 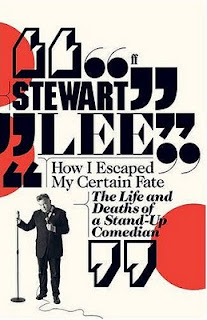 I shouldn't have needed to be have been reminded of this since I'd just finished reading Stewart Lee's fascinating and splendid book, How I Escaped My Certain Fate. Lee is rightly held in high regard by comedians, writers and industry folk. He shames many of us by refusing to compromise on his artistic endeavours and the way he would like to do stand-up comedy. The problem is that the way he would like to do it is not the way it is conventionally done - and furthermore, it is not to everyone's taste.

The book is an encouraging story of how a comedian can build up a following and become commercially viable through creativity, persistence and bloody-mindedness. But this comes at a cost personally and financially. The big bucks are to be made in The Hammersmith Apollos all over the country. It seems unlikely that Lee would play the Apollo five nights in a row - or even one night. (He may be able to fill the place, but I'm not sure he would be interested in playing a space which lacks intimacy - unless he was in some way able to turn it into a big joke that ultimately the audience would have been better off not coming and waiting for the DVD, since that would probably feel more personal that sitting six hundred yards away from a man with a microphone.)

Despite his frosty on-stage persona, and air of pretention and disappointment - which he admits is a blurring of an onstage persona and an offstage personality (although I've met him a couple of times and found him to be thoroughly polite and courteous), the book shows the humanity of the man - and a comedian who thinks deeply about his act. He is not motivated by money, although is rightly peeved when he is treated unjustly in the realm of finance. Lee does not really crave the adulation of an audience - highlighting dry patches in his shows which are intentionally joke-free. No-one can accusing of being a crowd-pleaser. He seems, at best, uninterested in the opinions of critics, and sometimes sympathises with their frustrations at his material or shows. He doesn't even seem that bothered by the opinions of other comedians, by whom he is very well-respected (in turn pays homage to others he considers greater or more pure than he). What comes across is that the only person he is seeking to satisfy creatively is himself. And it turns out that he is very hard to please.

We can all learn from this. Stewart Lee keeps pushing himself to find new ways of performing, new routines, turns of phrase and ways of managing audience expectation. I regularly write - and watch - comedy that feels rough, drafty and, at best, sufficient.

We are all in awe of Stewart Lee because he has very high standards. And we know that if we were to have such standards, and cling to our original comic visions, we might be less popular or make less money. When this impacts on spouses and children, it can seem indulgent, but we have to find ways to keep going, keep writing and creating worlds that we want to inhabit, or else, why bother? We'd probably make more money doing something else.
Posted by James Cary at 16:50