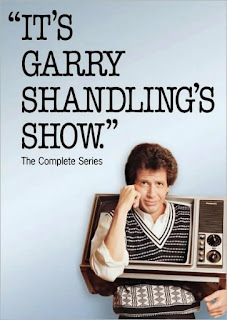 Over the last few days, I've seen a few episodes of It's Gary Shandling's Show. It ran for 4 years, and they made 72 episodes in total. In one sense, the show was before my time, beginning in 1986 when I was only 11. The show was a decontructed sitcom that broke the fourth wall, and played around with the cliches and tropes of sitcom. It was an anti-sitcom, pulling apart the format whilst playing along with it. At the age of 11, I was familiar with the sitcom format since I watched pretty much every comedy on TV as I grew up (hey, I had good parents, ok?!), but I wasn't terribly interested in seeing them parodied. Plus, I don't remember it being on much in the UK, but I think it was at various times and at various points.

As I watched the first four episodes, I was mindful that the initial impact was lost on me. The show came out in 1986 when there wasn't much smart, post-modern stuff like this around, and so there wasn't the buzz that you get watching something fresh and exciting. As you can probably tell, I was a little underwhelmed. I was surprised at how slow it was and how, on occasions, there were attempts at genuine emotion which struck me as a cheeky attempt to have your cake and eat it. I was also surprised at how charmless and unfunny his male best friend was - and it made me crave Jason Alexander. I really didn't believe that they were friends. There is plenty of good stuff in the show. Some nice jokes and Garry's vanity is funny (and obsession with how his hair looks is funny). But having watched four episodes, I wasn't inclined to watch any more.

My main problem with it is that lots of the jokes come from poking fun at the standard sitcom format. But that's so easy that it's barely worth doing. So why do comedians (and TV Critics) keep doing it? Sitcoms are contrivances. We all know that. We, the writers, know it. The studio audience know it. The viewers at home know it. We know that real life isn't that funny, and that coincidences don't happen that often and that our neighbours really aren't that wacky. It's a sitcom. So what's the joke?

Deconstructing yourself is a trick that's very hard to pull off. I've been working on the BBC2 sitcom Miranda in which Miranda's character regularly talks directly to camera, breaking the fourth wall. But we have to use that device very carefully and not overstep the mark. There are one or two lines delivered to camera in the middle of scenes like 'This is a like a farce' but these jokes have a law of diminishing returns, and we often write them, feel better and then delete them before they get to the readthrough. In fact, more accurately, I write them, feel clever and smug, and Miranda deletes them - because she knows that the audience aren't interested in my feeling clever and smug. They want jokes and characters and funny situations. They have invested emotionally in the world that's been created and they don't want to see behind the scenery.

Some might say It's Garry Shandling's Show paved the way for The Larry Sanders Show, which is undoubtedly a superbly crafted piece of work. In fact, it might be one of my all time favourites. But The Larry Sanders Show isn't deconstructing anything. It's a front-stage/back-stage character comedy. It's about relationships, real people and personas and the odd celebrity coming in and stirring things up. 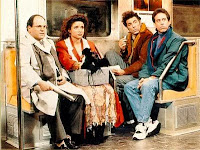 To me, It's Garry Shandling's Show is the Beta version of Seinfeld, which is a sitcom about a comedian, and a best friend and a neighbour - with a certain amount of 'material' to 'camera'. Seinfeld is smart and clever and really funny - and it subverts the sitcom format by superb characters and sheer originality. The plotlines are so brilliant, partly because they are frequently based on stories that you couldn't make up. (Watch the DVD and interviews with the writers frequently reference a story or event that happened to them or a close friend). And they are crammed into episodes that last about 21 minutes. Now that's hard.

Why make swipes at a sitcom format that can reach the comic heights of Seinfeld and The Larry Sanders Show? Parodying sitcoms use of Surprise Birthday Parties, Having to Look After Someone Else's Child/Pet/Priceless Vase etc is funny for a few minutes, but it doesn't sustain. Why do that when you can create a Soup Nazi? Or have an episode waiting for a table at a Chinese Restaurant? Or The Contest?
Posted by James Cary at 10:08