What are your Top Ten Sitcoms?

As part of my shameless attempt to promote my new book, Writing That Sitcom, and as a nod to the Buzzfeed culture of listicles, I’m going to work through my top ten sitcoms.

Hopefully, this won’t just be a self-indulgent exercise, but an informative one. I will try to make a few comments on why they’re important to me, but also what I’ve learned from them and, where possible, what we can all learn from them today – other than ‘I wish I was that talented’, or ‘I wish it was 1976 when there were loads of sitcoms and much less pressure on them’.

I’ve also kept it British. We can briefly look at my favourite Americans ones (eg. Seinfeld, Friends, Frasier, The Phil Silvers Show etc), but the way British sitcoms are created, written, shot and evaluated is bit different from how things are done in LA. The audiences are different too, so for now, we’re staying in Blighty.

So let’s begin the countdown with my Number 10: 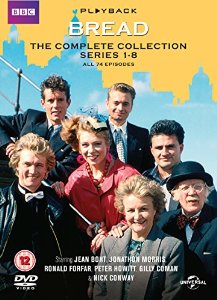 Yes, the much-forgotten, Sunday night ratings sensation, Bread. For those too young to remember, and too lazy to google it, Bread is a sitcom about an extended family, the Boswells, in Liverpool that scrap to make a living.

There is a strong mother at the centre of it, Nellie, who is fiercely loyal to her children, who all live together in a terraced house, with the granddad next door. Every now and then, the estranged husband, Freddie Boswell, would turn up. He’d run off with an Irishwoman, referred to as Lilo Lil. I watched almost every episode of this show as a child, or teenager, and have great affection for it.

A few years ago, I watched an episode which wasn’t quite as rewarding as I’d hoped, partly because the show had a serial, soapy element. The episodes often ended on a cliff-hanger rather than having a neat resolution. It was as much as family saga as anything else. There was quite a lot of location shooting, although the big core scenes were shot in a studio in front of an audience.

It also wasn’t as funny as I remembered. But this is not to say that there were lots of jokes that were now dated or fell flat. Carla Lane, the writer of the show, knows what she's doing. There were exactly as many laughs are she intended She was doing something more than a sitcom. More of a soapy, studio comedy drama.

Given it moves slowly, takes its time over jokes and has lots of characters, one would imagine this show was not a great success. And yet its one of the most successful sitcoms in BBC history. It was a monster hit show, running from 1986 to 1991. There are 74 episodes in total. It survived at least three changes in regular cast members: Joey, Aveline, Billy's girlfriend, Julie. Episodes regularly drew ratings of 14 million. I seem to remember one episode nearly hit 20 million. Yes, there was less choice back then, but that's a juggernaut of a show by anyone's standards. Carla Lane was doing something right. So what can we learn from this show?

Caring about the Characters
Carla Lane made us care about this family of characters so that we’re always rooting for them as they scrap to make a living, game the benefit system (DHSS), run businesses and trade stolen goods, all so they can put food on the table. We feel their pain and their joy. We’ve involved in their lives and the more we care, the more we laugh. And the more we care and laugh, the more like we are to come back next week, especially if there’s a cliffhanger involved.

I’ve read and watched quite a few sitcoms recently – mostly written by overeducated men in their 20s – in which the characters are rootless, heartless and charmless. It’s partly a function of the graduate culture in which people leave home and then get employment away from their family. But quite often, shows and scripts can reflect that lack of warmth, family and genuine emotion. Characters can come across as sociopathic, which can be funny in the short tem, but ultimately, you just don’t care about them. Bread is show full of roots, heart and charm. And people loved it.

My only frustration with the show was the number of peripheral characters, prospective boyfriends and girlfriends, that I felt got in the way of the comedy, which was always done best by the characters we knew loved. The show was a little unwieldy for half an hour, but given the strong communal nature of the show, a sprawling cast was probably inevitable.

Sense of Time and Place
The show seemed very Liverpudlian – to me watching in Somerset, at least. It felt like we were looking through a window on a world, including the Catholic/Protestant rivalries and mutual suspicions. (Aveline falls for a Protestant vicar). This show is infused with the spirit of the city, something that rarely happens now, especially in sitcoms. And Carla Lane knew that place – and had written about that place before in The Liver Birds.

Moreover, the characters are not longing to leave Liverpool. They love it. And they love their home. They have ambitions and dreams, but this is just sustains them as they try keeping their heads above water in tough Thatcherite Britain where the old certainties (and dockyard jobs) are gone. Whenever these characters venture out of their home town, it tends to go badly and they come scurrying back. The show is about home.

Catchphrases and Rituals
One of the things Carla Lane did was use catchphrases and family rituals to draw you into the family. The show was not short on catchphrases. From Joey’s ‘Greetings!’, through Aveline's 'Modelling' to Nellie Boswell’s 'Hello, yes' and her rant about Lilo Lil: ‘Don’t you dare mention her name in this house: She is a TART!'.

There were also rituals like taking the tray round to granddad (and getting an earful in the process) to the porcelain chicken being opened up for people to put their housekeeping money in. There are also the traffic cones they illegally used to reserve their on-street parking spots. It’s well worth thinking how we can all use devices like this to pull the audience closer and make them feel like they could just pull up a chair and be right at home like millions of us felt we could do in the Boswell household in Bread.

For more thoughts on sitcom - and getting the sitcom out of your head and onto some paper - get hold of Writing that Sitcom by yours truly.
Posted by James Cary at 13:17