Bluestone 42: Over and Out

Statement from James Cary and Richard Hurst, Creators/Writers of Bluestone 42

We’re sad to announce that Bluestone 42 will not be returning for a fourth series. Overall, it was felt that the show had run its course, with the return of the troops from Afghanistan, and the move of BBC3 to an online platform.

Bluestone 42 ran for 21 episodes over three series, was critically well-received, and was repeated on BBC1 and BBC2.

Its most recent series achieved higher audience figures than the first two, with a total of over two million viewers tuning in on average each week.

The Army – in particular XI EOD, the Royal Logistics Corps bomb disposal regiment – took the show and the characters to their hearts and assisted us greatly in creating a show that valued accuracy as much as comedy. Cpl Daniel Whittingham, interviewed in The Guardian, said "People who aren't in the military might think comedy isn't the best way to show what war is like. I disagree, and most soldiers I know think Bluestone 42 is spot-on, too.”

We were also proud that many of the cast raised money several times for the Felix Fund, the bomb disposal charity.

We would like to thank BBC3 for backing the show in the first place, and giving us the creative freedom to pursue our vision for the first comedy set during a war that was still being fought.

We are also very grateful for a superb cast and crew both in UK and South Africa who worked with professionalism, resilience and good humour throughout the process, especially on some very demanding filming days in very hot weather with some very tight budgets. And around some very loud bangs. Everyone can be proud of what we achieved together. 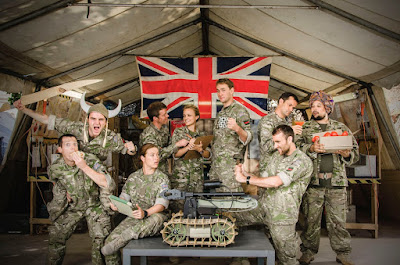