The Business of Not Getting Paid

Earlier today, I retweeted a link to an extract of a film about Harlan Ellison - in which he talks about many things, but in the clip he talks about how writers are often treated.

In America, writers seem to be held in far higher esteem than over here in the UK. In America, writers don't just write, but produce and cast and everything and make a ton of money. And yet American writers still have stories of injustice and being cheated out of money. They even go on strike. The extraordinary thing is that they're often legitimate complaints, and their money is being creamed off by people who have done nothing to make the hit in question such a success.

We have a long way to go over here. If it's not bad form to quote oneself, here's something I've said in a previous post:


The fact is that if you're a writer, you will write. No-one will be able to stop you. And nothing else will matter to you. Getting paid is great. And is essential every now and then. But the money is always secondary to the project - or at least it should be. If you're a writer, money is something you need to help you write.


There is no doubt that this desire to write is regularly abused by our paymasters. Here is my greatest frustration, which I will paint as a generic and regular scenario.

INT. CONFERENCE ROOM. DAY.
I'm sitting in a small conference room talking about a new idea for a sitcom with a producer, their boss, the executive producer - and maybe an assistant. Maybe I'm at the BBC. Or an indie. It rarely makes any difference, sadly. This is the fourth meeting I've had now. At the first, I pitched the initial idea, which they cautiously said they might like if they could see more of it. At the second we talked about the treatment that I worked up over a few days. I was told I'd need to come up with some more storylines. At the third meeting, having spent two or three more days on storylines, we talked about which channel this show would be suitable for, who could be in it, how to sell it. And all that.

INT. SAME CONFERENCE ROOM. DAY.
And here I am at the fourth meeting, and it's being suggested that we'd need script samples and that kind of thing. There's talk of a 'taster' tape. And that more work will be needed in order to bring a channel on board. And I can't help noticing that so far, the only one coming up with any ideas, fleshing them out and doing all the work is the only one who has not been paid a penny. Everyone else in that room - who's livelihood depends on writers coming in and pitching ideas that they will go off and be paid to make - is on a salary, gets paid holidays, sick leave and pension contributions. Their office expenses are covered and it doesn't really matter if they bunk of early now and then. And then there's me.

How is that right? No money is ever available for scripts from indies until they've managed to get the money off a potential broadcaster. Even multi-million pound companies that have six or seven different series in production, swanky offices in Central London and several layers of management. Trying to pin down the company for an option is barely worth the bother since it's only a few hundred pounds and is a pretty poor deal anyway.

Why more money isn't made up available up front for writers is baffling to me, since it is they who generate the ideas. The current business model for most indies and producers is akin to a pharmaceutical company who are rather hoping a scientist will wander in and tell them all about their cure for cancer. But that is the insane world we work in.

Anyway, if you've ever had the feeling that I've had in scenario painted above, you'll feel better after watching this clip in which an angry, wealthy, talented writer swears a lot and sticks it to the man. Enjoy. 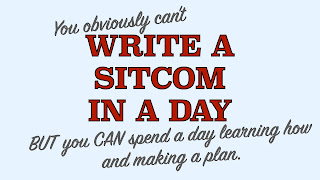 I'm running an all-day webinar, Write a Sitcom In A Day. Which you obviously can’t do. But the idea behind the day is help you understand the process and make a plan so you can get a script written. Polished. And done. Wanna join me?
It’ll be with me, via Zoom, going through the whole process and with loads of time for questions. Find out details, and book here.