Failure is Not Just An Option - It's The Norm

It's all in the title, really. And yet most of us can never get used to this. I think British comedy writers feel this pain especially acutely. Allow me to explain my self-pitying assertion.

Let's back up briefly. I've been listening to lots of Nerdist Writers Podcasts, which are brilliant, by the way. They talk about failure as much as any writer does - which is a lot, even though the writers on these podcasts are broadly speaking quite successful. Some insanely so. Most of us listening are less successful. But there was something else that was bugging me as I was listening in the UK that made me wonder what the difference was. In USA there are plenty of comedy writers who make a really good living working as a staff writer on one of the dozen or so shows in production and the hundreds of pilots to make a pretty decent living. Then there are the comedy-dramas, the thrillers, the medical programmes and the 'procedurals'. In short, there's loads of work out there and essentially it's possible to 'get a job'.

Not Like The USA
Over here in Britain things aren't like they are in America. There are a few long-running shows that are team written but they're all medical (Holby, Casualty and Doctors) and I'm pretty sure they're not run along the lines of those American shows. Other shows, once established, are opened out to others writers but the teams is small and they're not making 26 episodes in a season.

In short, if you want to be a comedy writer, you have to create, pitch and write your own show, which takes ages, while fending off the producer's suggestions about bringing in 'other writers' because this, frankly, may be it. The writer may be living off the script fees and decreasing residuals for some years to come. The writer has to gorge himself because the next feeding frenzy might be years away. Or may never come.

And so writing comedy in Britain is very personal. Which means that failure is all the more painful. But the problem is that failure is so common. The main reason for this is that hundreds of writers, stand-up comedians and writer-performers are churning out scripts trying to get shows on small number of channels with relatively few comedy slots - even though right now things have probably never been better with Sky's spending contest in full flow, Channel 4 spending money on original comedy they previously had to pour into Big Brother, and ITV are supposedly back in the game (even though ITV have said they're serious about making comedy every 18 months since they stopped making Hardware). And Comedy Central and Dave are making original comedy too. And, of course, BBC Radio broadcasts more comedy that all above combined.

Failure
And yet despite a buoyant market, failure is still a borderline certainty. I can vouch for that. All of my modest success have ended in indignant failure. I was very happy writing Think the Unthinkable for Radio 4, which won a Sony Silver, when I was told to stop. I was equally happy writing Hut 33 for Radio 4 when I was also asked to cease and desist. TV versions of both of these were proposed and rejected. I've since proposed two new sitcoms for BBC Radio 4 that have been turned down like bedspreads, as Bertie Wooster would say. I've probably written over half a dozen TV pilot scripts that have come to nothing. One recent one was especially painful since it was a failure that over three years in the non-making.

Part of the Job
Failure is part of the job. The only useful question is how to deal with it and get used to it. And comedy writers, if they're not careful, will apply sitcom logic to their own lives. In sitcoms, everyone gets their just deserts. Our hero triumphs. Kind of. Our villain fails. Sort of. Justice is done. In a way. The point is that in sitcoms, things don't happen for inexplicable reasons. That's bad plotting. But they do in life - and especially in the life of comedy writer. The producer says, "They don't want another series of your show, Mr Cary." You say, "But, the award? And the universally positive reviews? And aren't the cast really popular now..." At least you say that if you're Mr Cary responding to a deus ex machina. So how are we meant to react when we experience failure?

Coping Strategies
Everyone has their own way of coping, but it's always worth bearing a few things in mind: you don't know the real reason for your rejection and you'll probably never. The commissioner and/or controller has totally different concerns from you - and your show is very low down on their list of 'Things to Give a Toss About'. It may be they have a similar show, or think they do. Or are pretending they might. Or they just don't like your show and are using low ratings as an excuse. Or they love it but their boss hates it. Or they never liked it, and they didn't commission it and they're not going to recommission it. Or their sister's boyfriend son said your show sucked. The point is: it doesn't matter. It's not about you or your show. It never was. It was only about you to you.

On this Nerdist podcast, someone explains it well. Either Lawrence, Levine or Hatem. They say the whole business is like a crap shoot - and you only get one of the dice. So you ultimately have no overall control. It's a compelling and, in my opinion, accurate picture.

There's no point getting all worked and stressed about this. Or start scoring points. It doesn't get you anywhere. It's like barking at the moon. This is easier said than done, of course. Not long ago, I was expecting to co-write another series of Another Case of Milton Jones after previous shows were largely well-liked. Radio 4 said something along the lines of 'We feel this format has run it's course.' Who knows what that really means? But anyway, a few weeks later, we won a Sony Silver for the now-cancelled show. There is a temptation to crow and blow raspberries and shout 'daaaah! Told you!' but it doesn't get you anywhere. Radio 4 make their decisions based on criteria that only they truly understand. Even if they knew about the Sony award, it probably wouldn't have made any difference. So, much better to expend that crowing energy on thinking of a new show.

So Now What?
We're writers. We're not in control. And neither should we be in control. But what we do control are the words on the pages of our scripts. All we can do is make them as good as they can be. And try and enjoy that process. And if a TV channel doesn't want to spend £250k per episode shooting my sitcom, then that's not the end of the world, surely? Nobody died. Okay, maybe I didn't get paid, and that's annoying, but if we start looking for cosmic reasons for everything, we're going to get confused, angry and disappointed. Writing's hard enough - without extra confusion, anger and disappointment. 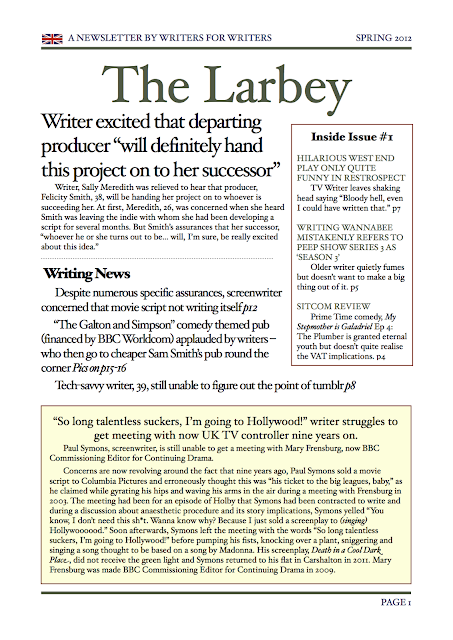 It's good, isn't it? You all knew this and told me this, but I didn't know this and frankly didn't believe you. But I am won over. It's a good show.

But here on the sitcomgeek blog, we can't just enjoy something and move on. We have to think about it a bit more than that. What can we learn?

The show is not just four teenagers talking about girls and swearing at each other, although there is plenty of that, and well-written swearing it is too. It's not about clever plots, misunderstandings and brilliantly timed reveals. (In fact, in the first four episodes at least, the plotting seems a little ropey). But the show is about something. This is seems obvious, but if you want to create a hit, think long and hard about the premise and the idea behind it. Ask yourself what's it about, because if it's about something, it can lack a few jokes or cope with some dodgy storytelling and be great.

Watch early episodes of Only Fools and Horses. It really isn't all that funny. It's convincing and believable, and it's about something. John Sullivan created a world that he knew. A show can be smart, well-written, riddled with jokes and technically flawless but if it doesn't create a world that is convincing, or that the viewer feels they can't relate to, it's unlikely to be a hit.

Even better, The Inbetweeners isn't just about something, but about a stage of life - in this case, that tricky stage of being in sixth form at school, treated like a child but expected to behave like and adult whilst coping with wildly pulsating hormones. The writers have brilliantly captured that stage of life. Stages of life are worth thinking about for sitcoms. It sounds odd to mention them in an article about The Inbetweeners but Friends and One Foot in the Grave are similar.

In Friends, the creators identified that there were many people living in a hitherto untelevised period of life. They were graduate-type young-ish people no longer with their parents but yet to marry and start their own families. And so they formed close bonds of friendship with their peers. It's there from the opening song 'I'll be there for you'. And millions of people understood that stage of life and wanted to part of that Central Perk crowd. A billion dollars later, the rest is history.

One Foot in the Grave is about another stage of life - the retired man who still feels he has still has something to give. And his constantly being sidelined makes him angry, along with every tiny thing in the world.

So, the question we can ask ourselves about that sitcom script for that show we're creating that doesn't seem to be working - Could it be about a stage of life?

Probably not, but worth asking.
Posted by James Cary at 23:04 3 comments: