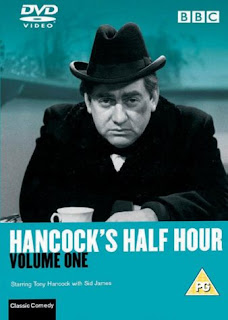 Tony Hancock is the ultimate British sitcom character, almost the original on which all others are based.

His name tells you quite a lot. The character’s full name is Tony Aloysius Hancock. Two regular, everyman names, with pretention stuffed inside. Hancock is pompous, self-important and has no self-awareness. And, most crucially, his expectations exceed his ability, just like Captain Mainwairing, David Brent, Basil Fawlty, Arnold Rimmer et al.

He attempts numerous projects, jobs and schemes to unlock his genius, pull himself up by his boot straps or make a name for himself. They always end in failure. Hancock is insistent that the world is against him. Which it is. And that’s how it feels to us. But we can at least comfort ourselves that none of us are as deluded, frustrated and bitter as Hancock.

The central character is so strong that he works in almost any setting, which is handy because the show is very erratic in its situation. Given the sitcom form had not really settled down, it seems no-one felt any need to impose any kind of continuity between episodes. The result, looking back over the  TV episodes that survive, is that you’re never quite sure whether the guy who’s gone to give blood one week is the same guy with all the radio kit another week. But you don't care. It's just funny.

The central character is so strong that he works with any characters, which is also handy given the real Hancock was so paranoid and insecure that over time, he had every regular cast member removed, most notable being Kenneth Williams and Sid James. But it didn’t matter, because the character at the centre is rock-solid – a small-minded, moralising also-ran who embodies all of our prejudices, neuroses and cowardice. And yet somehow, you care.

The central character is strong, but he doesn’t work without the writers, Galton and Simpson. The star killed the geese that layed the golden eggs, firing Galton and Simpson, who’d written 150 episodes for TV and Radio. So they'd probably had enough anyway. But from that moment on, Hancock’s days, comedically, were numbered. And sadly, literally, as it turned out.

For more sitcom analysis, and how to get the sitcom from your head onto a page, why not have a look at Writing That Sitcom, available for Kindle/Kindle App now?
Posted by James Cary at 17:11