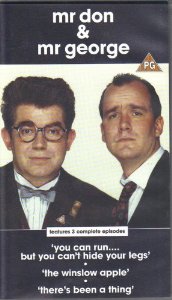 Mr Don and Mr George is a sitcom spun off from the sketch show, Absolutely. It was completely devoid of bad language and innuendo, and played at 10.30ish on Channel 4 on a Friday night. The show was not a huge success, as you might imagine. It was hardly 'edgy'. It only ran for one series. But I utterly loved it. And still do.

It's just a wonderful world of silliness, jokes, self-defeating set-ups and pay-offs, all based around a slightly abusive relationship of bullying Don and submissive George.

What I love about it most is its comedy purity. Everything in the show is either a joke or a set-up. And it didn't feel like any sitcom I'd ever seen before.

That said, in hindsight, it wasn't a long way away from Sean's Show or Father Ted. But both of those shows were more successful. The latter, became a classic and still endlessly repeated on More4 or E4. So, much as it pains me to do so, I have to look at why this surreal gem wasn't not a hit.

Here's where I think it fell down. It wasn't as emotionally engaging as Sean's Show or Father Ted. Both shows were crammed with jokes and oddities, but we rooted for Sean, who'd built up a live fanbase through being a successful comedian on the circuit. They went with him as he attempted to deconstruct the sitcom. And of course, who doesn't love Fathers Ted and Dougal?

Ultimately, we never really cared about Don or George, because the show always went for the joke rather than play any extended emotional beat. Being eighteen years old when I first watched it, I didn't care about this. I just wanted jokes. And I got them. And they will stay with me forever. Even though I taped over my VHS tapings of the show by mistake. Thanks to Youtube and 4oD, the demented world of Mr Don and Mr George lives on.

Is your sitcom idea emotionally engaging? For more thoughts on writing that sitcom script, see here.
Posted by James Cary at 21:38