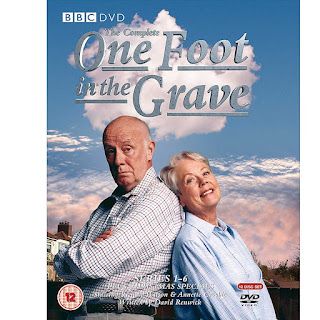 One Foot In The Grave is a modern classic and the one show that gives me hope for the modern-day, mainstream sitcom. It appeals to all ages with its mix of recognisable situations, absurdities and tapping into the frustrations of modern life and bad service. The show is permanently waving a defiant fist at the universe.

One might make the mistake of thinking that Victor Meldrew is a grumpy old man. He isn't. He's a perfectly pleasant senior citizen who likes to be polite, always calling Mrs Warboys by her formal title and name. Even though he finds her annoying. And selfish. Which she is. But she is also vulnerable, so we feel sympathy with her.

Meldrew just likes things done properly, but most of all, he would like to be treated with respect. And when he is ignored or taken for a ride, he causes a scene or creates a plan for revenge which usually backfires on him, even though he morally on the side of the angels, and his anger is righteous. He is turned into a monster by society.

Margaret, Victor's wife, is stuck in the middle, dutifully helping her friend, Mrs Warboys, trying to be a good neighbour but generally trying to cope with the vortex of chaos in her house - when a plant is potted in the downstairs toilet, or Victor is buried up to his neck in soil.

So it's worth noting that this show is successful because we have true sympathy for the main characters, including their long suffering neighbours. It would be easy to create a monster like Victor Meldrew and omit to make him likeable, which would make him far less appealing and funny.

The other genius of this show is its physicality. Added to all of the above, and the verbal rants, are strong physical jokes, both big and small, like this one:

It's not just small moments of slapstick, but elaborate set-ups and pay-offs that are works of genius. David Renwick is able to conceal the big reveal until the last possible moment for full impact, ensuring there are no ambiguities or lose threads. It's like a carefully stage-managed magic trick. So it's no wonder that Renwick also wrote a comedy drama about a magician and illusionist, Jonathan Creek.

It's a masterclass in plotting and one to learn from when writing our own sitcoms. Often, a script isn't going well because it's not been adequately plotted. In order to keep things jolly and funny, you've panicked and gone for short term jokes rather than playing the long game. But you need to think all the way to the end and go back and cut material, routines and jokes if they're not adding to the whole. It's painful but you sometimes have to throw out really funny stuff.

Because the plots are so well crafted and paced, with the reveals coming at exactly the right moments, with physical jokes along the way, and sympathetic characters who can boil over, you don't need that many jokes. Looking back over episodes, there are lots of lines which, on reflection, could be funnier. But Renwick doesn't need them. He is a master, holding back until the right moments, and then going all in.

So, what can we learn from this modern masterpiece? Sympathy for characters, more time on the plot. Take care of that and the comedy takes care of itself.

For more sitcom advice, and how to get the idea from your head into a pilot script, have a look at Writing That Sitcom, available for Kindle/Kindle App.
Posted by James Cary at 10:36