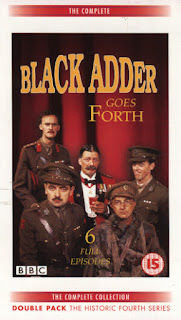 How can anyone not love Blackadder? We may be divided about which series we like the most (I’m a 4, 3, 2, 1 man), but we all love the characters and the stories, but most of all, we love the jokes, the memorable, lovely, wordy jokes that draw on the richness of the English language.

I've been obsessed with the show from the first time I saw Blackadder II on BBC2 when I was fairly young. I remember the excitement of Blackadder III coming out, and the jaw-dropping Blackadder Goes Forth a few years later. Since then, I've seen and heard every episode so many times, I've essentially memorised them. Or at least, I've memorised the ones with the Baby-Eating Bishop of Bath and Wells, The Duke of Wellington, The Puritan Aunt and Uncle, Flash, Dr Johnson and many others besides. If only I could remember useful information so easily.

What can we learn from this show?
You can see that the writers and performers all had a background in sketch comedy. And the show does, if you were really struggling to find things to criticise, feel like an elongated sketch. But the key to its consistent funniness is that each scene is like a little sketch, with a premise that is then mined for every possible joke before moving on. At the end of each scene, you know they haven’t left anything on the table.

For example, the huge intelligent but pompous Dr Johnson walks in having just written the first dictionary:

So what do we learn? Get into sketch comedy. Go to the Edinburgh Fringe. Watch Mitchell and Webb, Fry and Laurie and The Two Ronnies. See how it works. Try writing sketches. Write for Newsjack. Get into that discipline of writing tight three page scenes packed with jokes around one simple idea. It will stand you in good stead for sitcom writing.

Being Ruthless
In Blackadder, we can also see ruthlessness with scripts and editing at work. The scripts are extremely tight. Every line is either a joke or a set up to a joke. Very few British shows match the joke rate of American hits like Friends. But Blackadder can. It’s a relentless stream of brilliant jokes that are used on every occasion. In my book, Writing That Sitcom, in the context of using jokes to stop expositional lines from being boring or eggy, I write this:


A few decent jokes go a long way and cover a multitude of exposition. And there’s no better than Curtis & Elton on this. A certain Blackadder line could read:

George: Are we going to attack the enemy? How exciting!

Blackadder: Yes. And we’ll all die in the process. This war is a complete waste of time.

That’s exposition. And not funny. Here’s the same exposition with jokes:

George: Great Scott sir, you mean, you mean the moment's finally arrived for us to give Harry Hun a darned good British style thrashing, six of the best, trousers down?

Blackadder: If you mean, "Are we all going to get killed?" Yes. Clearly, Field Marshal Haig is about to make yet another gargantuan effort to move his drinks cabinet six inches closer to Berlin.

Not only is the latter version 1000% funnier, it also gives us so much more information about their characters. We’re only four minutes into the series when these lines crop up and these are brand new characters for us, since the previous series was set a hundred years earlier where George was the Prince Regent and Blackadder was the butler. Now Blackadder is a Captain. And we know George, a lieutenant, is a lower rank because he calls Blackadder ‘sir’.

We also learn in the few lines that George is insanely patriotic, overly optimistic and probably a bit thick given how previous attacks have gone.

We learn that Captain Blackadder is a realist, cynical and unimpressed with the general directing the battles and their futility. This isn’t just exposition.

So Captain Blackadder. I salute you. You’re my second favourite British sitcom of all time.

To buy Writing That Sitcom or a for a free sample, go here. Or here if you're in USA.
And the Sitcom Geeks Podcast is here or look for it on iTunes.