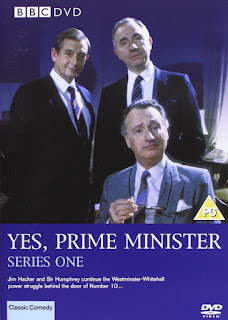 The sixteen episodes of Yes, Prime Minister are, to me, perfect situation comedy. Because I’ve always been such a sitcom geek, whenever I watch any sitcom I sometimes get itchy and think that the writers have missed out a joke, or have let a weak scene get through, or there are plot holes that need fixing. I watch Yes, Prime Minister and my sitcom geek alarm never goes off. It powers down and goes into sleep mode. Because Yes Prime Minister is perfect.

I know some think that Yes, Prime Minister is a shadow of the original Yes, Minister series. I don’t see it that way. Yes, Minister is brilliant, but it can be a bit messy and ragged. Too many location scenes, which for some reason I always regard as a failure in studio sitcom writing. Plus Hacker’s original political advisor is really annoying and not funny, sucking energy out of every scene he’s in. The ‘dear lady’ in Yes, Prime Minister is much more fun.

The show has two perfect characters – an odd couple – who lock horns every week. Hacker is the Political Will versus Sir Humphrey, the Administrative Won’t. They both think they’re doing the right thing as they see it, trying to change things for the better, or preserve things as they are. But Hacker is too worried about his popularity. And Sir Humphrey too obsessed with the Civil Service staying big, slow and magisterial. So they are perfectly calibrated for maximum comedy conflict.

Stuck in between is the delightful Bernard, who sees both sides and pulled in both directions, and sometimes has to be set straight by Sir Humphrey. Like this:

And that’s about it. You have other characters, like Arnold or Mrs Hacker, and the occasional guest like one of my favourites, Sir Desmond Glazebrook. But mostly it’s a two hander, where the one with the upper hand changes each week.


The show has characters as strong as Hancock’s Half Hour, is plotted as brilliantly as One Foot in the Grave, has the distilled perfection of Porridge and glories in the English language and has all the set pieces like Blackadder (see below). It’s a masterpiece that continues to inspire me. One day I hope to write something that might even be half as good.

So that's my Top Ten. I'll write another blogpost about glaring omissions like Fawlty Towers, Dad's Army, and Only Fools and Horses. But this is a list of my Ten Favourites, not necessarily the best, most successful or well-respected. It just so happens Yes, Prime Minister is the best.

"Straight talking, supportive but never patronising, and clearly the work of one who actually knows." Amazon Review


Oh, alright then. Here are some more clips. Here's one with just the three of them. Wonderful:


And a superb set-piece scene about who reads the different newspapers.