On Twitter, @benjaminpmoore asked me about plots. Should they be serious or funny? Well, if you’re writing a comedy show you want your plots to be funny, right? Sorry to be facetious. Not helpful. Let’s think about this.

Sometimes you’re working on storylines and think wouldn’t it be funny if x, y or z happened? Probably. This seems to be how Graham Linehan constructs his stories, by thinking of funny set-piece scenes or images that seem comic. It’s quite an unusual way of doing it, but who am I tell Graham Linehan he's doing it wrong? Mainly because he's not. What you need when plotting is a starting point – even if that starting point is at the end.

When thinking about plots, if funny stories, moments and scenes present themselves, write them down and work with them. It could be moments in your life or stories you’ve heard. Or stuff that nearly happened. On Miranda, we thought it might be funny if Miranda ended up having to do a eulogy at a funeral while not knowing who was actual casket. It was just a case of making a series of events take place that we believable, involving a new mobile phone and a late message, partly based on a true story that had happened to Miranda. And then falling into the open grave afterwards was just a bonus. And that all happened in the first ten minutes.

Whether it’s a funny story – or a serious story with funny moments and consequences (which often turn out funnier) – what you’re always after in storylining is logic and truth. You need logic in the story and truth in the character. You need one step to follow on from another one – and for the character to make those steps because they’re obvious or believable for that character in that moment. 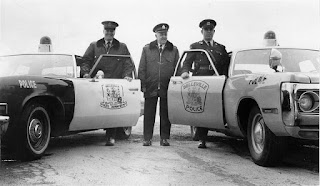 One obvious is example is ‘Call the Police!’ When characters on TV end up in some kind of illegal scrape or confronted with criminals, there are times when you’re just screaming at the television ‘Call the Police! Right now, your character would just dial 999 and that would be that.’ But the writers have decided it would be funnier if they didn’t call the police and tried to cover things or up or dealt with it themselves. If they can’t the police, you need a really good reason for it. Either there's some personal threat so they don't – although for me these threats often ring hollow or seem generic - or the old flat mobile/no signal trick, which normally feels like cheating. Why is their phone not working? Is it because said they didn’t need to charge it up and refuse to admit they did because they’re proud? Or maybe they’re a stickler and in a long-running battle with their phone provider and have been cut off? It needs a reason.

To service your funny story, or get to your funny set-piece finish, you don’t want any beat or moment, when any normal human being, watching the screen would say ‘You would never do that’ or ‘That character would never do that.’ If you’re lucky, you won’t get that far because in rehearsal an actor worth their salt will ask the director – and then you – ‘Why is my character doing this?’ (This is the non-pretentious version of 'Love, what's my motivation?') As the writer, you will need an answer. And that answer should not be ‘because it’s funny’ or ‘because we need you to set up the story for later.’


What this means is more work in the storylining stage. But it’s worth putting the time and energy in then – because once you’ve written a script, cutting funny jokes and brilliant routines that have no logical justification is really hard and painful. On Series 2 of Bluestone 42, Richard and I spent months thinking up. researching and sifting stories, finding funny moments, beats and lines, and then making sure each story, beat and moment was underpinned with truth and logic. We started this process in January for all seven episodes. Quite often they end up on the drawing board, or in the folder for another day, rather than in a script. We didn’t start writing any scripts ‘til the end of May and have been writing and rewriting the scripts from then until now (mid-November). There’s no special secret or inside track. Just truth and logic. Truth and logic. And time.

"Straight talking, supportive but never patronising, and clearly the work of one who actually knows." Amazon Review