The Origins of Bluestone 42

Plenty of things about Bluestone 42 seem unlikely. The fact it’s a comedy drama exclusively set in an active warzone is one. The fact the writers of this show met whilst writing for Miranda is another. It's all rather incongruous. And yet this is how the show came about. 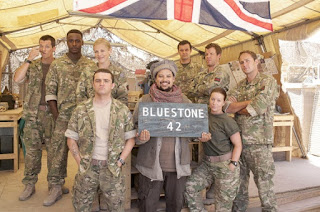 It might seem that writing a comedy about bomb disposal in Afghanistan was just an attempt to be controversial and generate some press. After all, writers are attracted to extreme situations and troublespots like moths to flames. But this is not how the show came about at all.

Why Write about Soldiers?
My co-writer Richard Hurst and I had been talking about a number ideas for new TV comedies and the starting point for Bluestone 42 was simply soldiers. Between us we knew some people who had served in the military but their experiences and general feeling about fighting on the frontline didn’t fit with how it was being portrayed in the vast majority of media. There had been many fine documentaries and dramas telling stories from Iraq and Afghanistan about the trauma of war, the pointlessness of the conflict, the price paid by families and the treatment of wounded soldiers or widows. This was all understandable. There are lots of stories to be told. But each story gave yet another reason to stay away from a conflict against an invisible but lethal enemy in part of Helmand riddled with IEDs.

And yet soldiers want to go. This was brought home to me when I saw a journalist interview some troops from a regiment that was about to deploy to Afghanistan. The journalist asked them whether they wanted to go, and was almost struck dumb on hearing that they couldn’t wait to get out there. They had trained for this for years, they explained. They wanted to put it their hard-won expertise to good use in a place where it would count. We wanted to write about these people.

After plenty of research and talking to troops some things were clear: British soldiers are indeed remarkable. They get on with the job in hand with whatever resources they’re given, normally with a wry smile and a dry joke. Their training is superb, lengthy and intense. One of their expressions is ‘train hard, fight easy’. We’ve not put this expression in the show since it could easily be misunderstood. Of course combat is not easy for them. But the idea is that if you train as hard as you can, you can deal with most things when the pressure’s on and the bullets are flying.

Why Write about Bomb Disposal?
We also discovered that the teams that go out and defuse IEDs (Improvised Explosive Devices) might be a good place to focus our attention. Roadside bombs are not generally removed by Engineers, as we first thought – although some Engineers have now been trained to do that job. And it’s engineers who do the mind-meltingly dangerous task of checking for IEDs in the first place with their vallons (those metal detector things). But the guy that does the famous ‘long walk’ is called an Ammunition Technical Officer who is, in fact, part of the Royal Logistics Corps.

The RLC is not a glamorous part of Her Majesty’s Armed Forces. As the name suggests, there’s a lot of fetching and carrying involved. But one of the things they fetch and carry is live ammunition, including ordnance left behind, and possibly booby-trapped. by the enemy. Ammunition Technical Officers got good at dealing with this sort of thing over decades of experience in Northern Ireland, rendering safe all kinds of improvised bombs. Which is why ‘the bomb guy’ is from the Royal Logistics Corps and why 11 EOD, the jewel in RLC’s crown, leads the world in bomb disposal.

Who are Bluestone 42?
In our show, our ATO is the emotionally stunted wise-guy, Captain Nick Medhurst. He leads the counter IED team with the call sign of Bluestone 42. He is aided in his take by his diligent number two, Corporal Mills and his ‘bleep’, Corporal Bird. Her job is to jam the airwaves to stop the IEDs from being set off remotely and ensure there’s a safe cordon around the area. Then there’s the three man military to escort, Privates Mac and Rocket, led by Lance Corporal Simon Lansley.  In reality, that might be a separate unit of four soldiers, or they can be smaller. And they could have had their own driver too.

Is it Accurate?
We wanted the make up of the team to be as realistic possible, partly out of respect for our soldiers, but also because things stop being funny once they feel phony. Comedy is about truth. But getting the truth about how the army operates is an awful lot harder than it sounds. It’s a baffling and byzantine array of battlegroups, brigades and battalions, even more complex that the BBC management structure. Counter IED teams are even harder to grasp because they’re made up of soldiers form different regiments.

Moreover, read books, speak to soldiers and members of previous counter IED teams and you get different stories. Many swear blind something is always done one way before they either think of an exception, or someone else swears blind the opposite is true. Plus a bomb disposal team in Iraq in 2005 looked different from one in Afghanistan in 2007 which looked different again two years after that.

We also had to balance this with what is achievable in half an hour of screen time and what is comprehensible to an audience who may or may not have seen The Hurt Locker (an exciting but profoundly problematic film).

In the end, the six man team (if we count Corporal Bird as a man, which I’m sure she would like us to do) seemed about right. It is quite hard to introduce that many characters in episodes – alongside a padre, Mary, who is another key character in the series. Plus the enigmatic and slightly insane Lieutenant Colonel, Smith. In episode two we also meet another regular character, their interpreter, the irrepressible Faruq.

Nine regular characters is a lot but focusing on fewer felt unrealistic. Hopefully eight episodes gives us a chance to get to know them, peeling back layers and finding out more about Bluestone 42 as we go. We hope the audience enjoy doing that.