Make the Most of Your Freedom

Blogging is easy. You write. You post. And it’s there for all the world to see, should they choose to. Access to the audience is free. There are no barriers. For some, this direct, open connection feels like the norm, and the way things should be.

But this arrangement is because blogs don’t really cost anything. The blogging software is free. I have a laptop and broadband. The only thing that this blog post is costing me is time, and possibly a little sleep. (It’s 11pm as type, and I should go to bed, really. I have meetings tomorrow).

Sitcoms, however, are not blogposts.

Lots and lots of money.

Round about £300k an episode if they’re being shot properly. You might be able to get that down if you’re creative or clever – or you don’t care if it’s badly shot or not funny – but sitcom is an expensive medium. If you’re making six episodes, that’s at least £1.5m being poneyed up right there. So people think hard before spending that kind of money.

Getting a sitcom on TV, then, is difficult.

This is exacerbated by the number of people trying to do it. And therefore failure isn’t just an option. It’s almost a certainty. Some sitcoms get through and get made. Of those that do, many don’t last. Either way, the chances of getting your sitcom on air are slender.

And so it seems frustrating that, for lowly writers, it doesn’t seem to be a level playing field. The latest crop of successful sitcoms are almost entirely by writer-performers. Peep Show, by Sam Bain & Jesse Armstrong, is the exception. Although the stars are themselves writer-performers. But let’s just take the nominees for the Broadcast awards just announced: Car Share; Catastrophe; Detectorists; Inside No. 9; The Keith Lemon Sketch Show; People Just Do Nothing. All of these shows are by writer-performers. And on TV tonight as I type, is Josh, and Toast of London. Channel 4 also has Chewing Gum. And you can see reruns of Miranda, Mrs Brown’s Boys and Not Going Out on other channels.

If you’re not a performer, then, it can seem that odds are stacked against you getting your own sitcom on air. On the latest episode of the Sitcom Geeks podcast this week, we talk about the rise of the Writer Performer sitcom.

I’ve written about it before (HERE and HERE), so there’s no point in repeating myself. But to summarise, I’m not saying that commissioners shouldn’t have commissioned those shows. All those ones I’ve mentioned are loved, respected and enjoyed by enough people to tick the boxes. And you can see how a show with a strong, tried and tested central performance would appeal to a commissioner. Stand-up comedians who can play large venues have a following and give you an audience, at least at the start. They can go on the radio and Graham Norton and promote the show. And they're probably very good at comedy. It all makes complete sense.

I have also point out these shows still often need writers. Look at the credits and you’ll see lots of famous comedians regularly collaborate with other writers, and once a series gets going, there might be three or four other writers. Maybe more. So there’s work to be had, and a job to be done, even if there might not be a format to be owned.

But here’s the one advantage the writer has over the writer-performer. The writer can write about anything. Anything at all. Any one. Any time. Any place. Any where. You have freedom.

A stand-up comedian with persona built up over five years, or twenty years, of gigs and panel games is largely hostage to that persona. And that’s the persona the commissioner wants. They really don’t want to see that persona playing against type. Not initially, anyway. But as a writer, you should make the most of that advantage. You can write with ambition and passion, rather than your own acting ability or alter-ego.

Plus you have the freedom – FREEDOM! – to work on other people’s shows. And those shows don’t even all have to be comedy. You could write a drama.  There are no writer-performers in drama. And writers seem afforded greater respect, and more creative control. But then again, the grass is always greener. And I just love jokes. I suspect you do too. 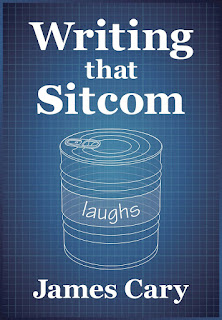 "A MUST Read for Aspiring Comedy Writers. This book gave me the feedback I needed and the tools to change and greatly improve my script." Dr. Rw Fallon
Posted by James Cary at 23:52