Taking Your Characters For A Test Drive

We’ve got Geoff and Lynette – who are marrying for the third time. The second time to each other. The sitcom, called Third Time Lucky, rides or falls on their relationship and interaction, so there’s not much point going much further without working out some rough storylines to see if these characters work. Not only do they need individual quests, they need to clash. We’ll find out if they do when we consider some thumbnail stories.

On another series of blogposts, and on the podcast, I look at how to generate storylines. Have a look there for the methods. Here I’m going to put it into practice in a slightly truncated way since this isn’t the ‘big plotting’ part of the process. This is more like taking the characters for a test-drive.

When generating stories with my writing partner earlier this year, we tried one exercise which proved quite fast and fruitful, so I’m going to try that here. It involves coming up with word, plot or story for each letter of the alphabet. Take a word that pops into your head, and then have a think about what a story could that relates to both characters ideally.

Let’s just pause to remind ourselves who Geoff and Lynette are. They are both optimists, remember. They both think that this marriage can work, even though it didn’t before.

Lynette
Lynette is an optimist about the worlds. She's trying to change things for the better. She was one of the women at Greenham Common. She wants to help her fellow man, woman, person, animal, whatever. Every little helps. But she’s not a impractical dreamer or hippies. She’s focussed and organised. Which is why she did well in business and feels a bit guilty about selling out.

Geoff
Geoff is an optimist about trying to improve the lives of people around him (rather than the world)  - and especially himself. He loves gadgets, and new things and reckons that this latest thing really will love up to the hype. So he’s a bit naïve in that sense. And a hoarder.

So that’s Lynette and Geoff. Shall we start? Let’s just worry about A-N as random plot starters. Here are some words that jumped into my head to trigger plots:

I have no idea where these ideas will lead. We're just taking the characters for a drive. So let’s take the first of those:

Apples
Three ideas spring from this, to me. Do they have an apple tree that produces too much fruit? Lynette would collect them, and make apple pie and give them away. Maybe she realises she can sell them and make money, which she guiltily feels should be given to charity. Geoff would want to get involved and buy an apple-processor. Maybe use some attachment from old food processor that’s been relegated to the garage (the home of all things technical). And it goes horribly wrong. He ends up in A&E.

Would it be better if they tried to chop the apple tree down because it just produces too many apples (like the trees in the garden of my parents-in-law). Everyone’s got apples and no-one wants them? Geoff would love to get his hands on the latest chainsaw. Even though he’s got an old one, he’d get a new one which has extra functions. That feels nicely dangerous as a story. Plus we have a falling tree which could fall the wrong way.

Another idea that occurred is that they have apples, and blackberries. We’ve got blackberries at the end of our garden – plus some other berries we think are rosehips. Maybe they get some odd berries, and Lynette would be keen to put them into a jam and give the jam as a present. They only discover later that the berries are poisonous. They tell a friend to throw away the jam (they don’t want to reveal it’s poisonous because it makes them look foolish), but the friend reveals it’s delicious on toast. They go round but the friend has made them some on toast to eat but they don’t want to eat it and have to reveal why. Friend furious and but is alive. Maybe they thinks they're going to die.

So there’s three apple ideas. I’m sure you’ve come up with others. Next. Bears. 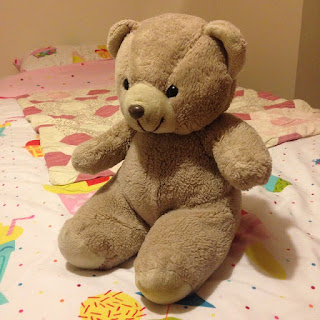 Bears
I’m thinking about Teddy Bears. It could be that Geoff, who is a bit of a hoarder, finds his teddy bear, and it reminds him of his childhood. Or giving it to his son. Or another child of his who didn’t love it as much as he did. The worry about this story is that it’s looking backwards, so I’m dubious.

Maybe the bear is worth money and has too much sentimental value to sell. Doesn’t sound very interesting, does it?

Maybe his teddy was stolen or lost – and he’s sees it for sale in a charity shop, but a little child buys it before him. Geoff offers the child £50 for it, but the mother is appalled. That feels generically funny, but not very Geoff-like. Could happen to anyone.

Bears also says ‘Zoos’ to me. Lynette would be torn on zoos, because they’re good for animal preservation and public awareness. But she thinks they're a bit cruel. Could she adopt a bear? Geoff thinks it’s a waste of money because you don't actually get a bear. Can't help thinking Geoff would start to find ways of improving the bear's habitat in the zoo, which the zookeepers obviously rebuff. Maybe the ‘adopt a bear’ scheme at the local zoo is badly run and Lynette starts to get involved and is effectively ‘selling bears’ and it looks bad. Something like that.

This one doesn’t seem as fruitful as apples (ha ha), but it’s all good for thinking about the key characters.

Nothing particularly amazing has jumped out yet. But that's fine. It's early days. What's encouraging is that the characters are having attitudes and quests. So that's good. And some of these ideas may yet turn into a plot for the pilot of the first series. We're building up a load of material which can be refined and sifted later, so we're not staring at blank sheets of paper.

We just need to continue the process with C-Z and see what we've got. Maybe I'll look at those in the next post. Or you could have a go in the meantime. (Weekend homework...)


If this sort of thing is interesting or useful, may I recommend my book, Writing That Sitcom? And you might also enjoy a two-day sitcom-writing workshop with me and Dave Cohen on 5th & 6th Nov 2015. Details on that here. We also do a podcast which is here.