We're concluding the conversation with Seasoned Sitcom Pro, Pete Sinclair. Last time we found out the lessons learned from writing two sitcoms that didn't make it to a second series for a number of surprising reasons. Read about that here. This time, Pete's talks about the writing of hit sitcom, Lead Balloon. (Spoiler: Jack Dee comes out of this annoying well)

Sitcomgeek: Did you manage to apply any of the lessons learned from All Along the Watchtower and Mr Charity to Lead Balloon? What was the process on that show?
Pete Sinclair: I absolutely did!  Although the idea was Jack's, when it came to the execution – in terms of the naturalistic tone and the fact that it was non-audience – Lead Balloon was the polar opposite of my first two sitcoms.  And the other lesson I learnt (especially from Mr Charity) was that if I had any doubts at all about anything, they had to be addressed!  If something was wrong, it was no good hoping that it would resolve itself or that it wouldn't matter that much.  I knew from bitter experience that it would end in tears.  So, for example, when it came to decisions about casting, I was far more ruthless than I would have been before. 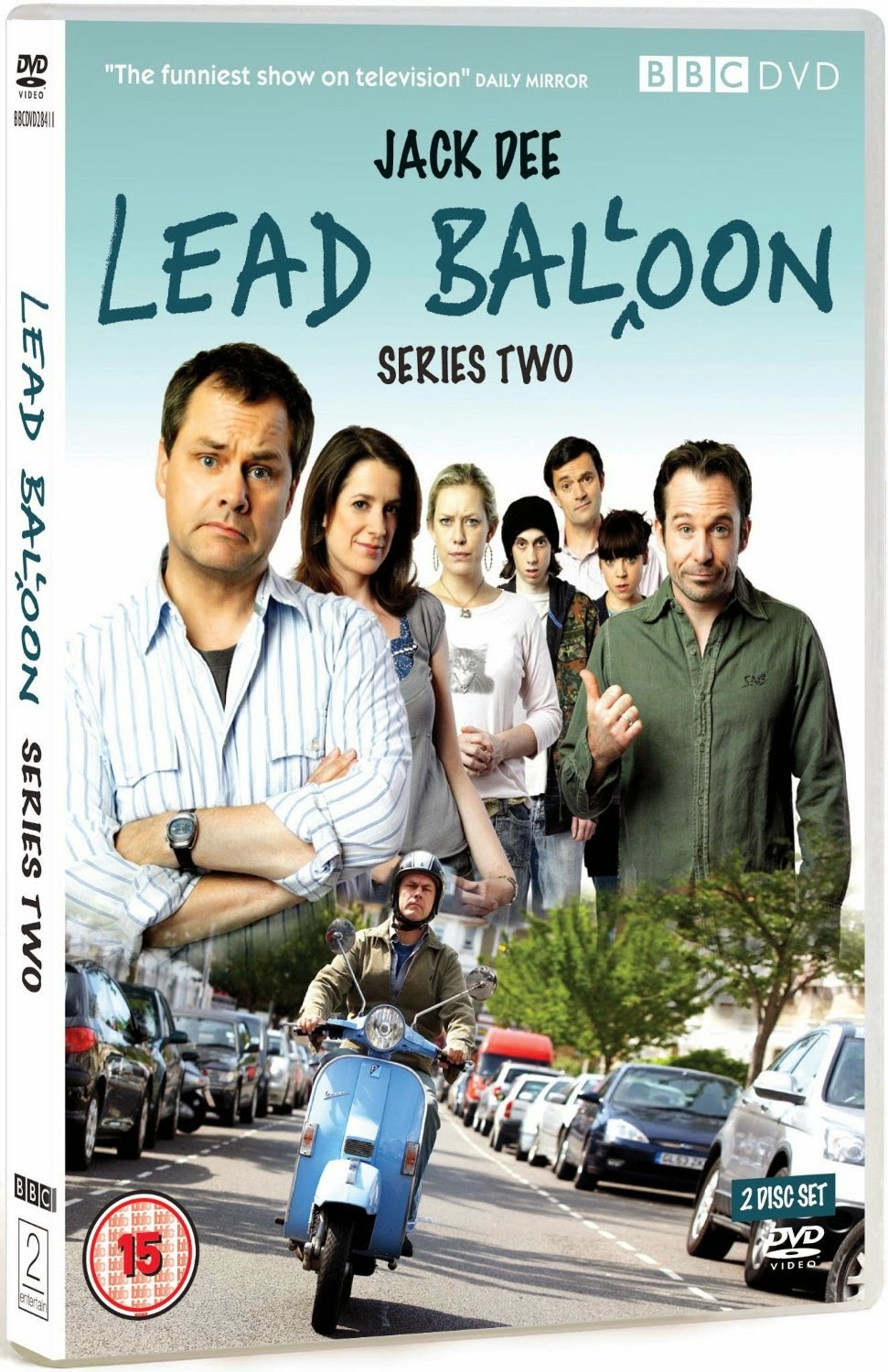 Lead Balloon first came about when I was working with Jack on his stand-up tour.  I had worked with him before on shows like Jack Dee's Happy Hour but it was the first time we had worked together on our own.  He told me that he'd had an idea for a sitcom and asked if I'd be interested in writing it with him.  As I always say – it's the easiest question I've ever been asked in show business!  I knew that with the involvement of a star name like Jack, the chances of getting it on – and almost as crucially, being allowed to have creative control over it – would be vastly increased.

Why BBC4? Surely Jack Dee would want a bigger audience?
Right from the outset, Jack was adamant that it should be aimed at BBC 4.  He didn't want to be under the pressure that a sitcom on BBC 1 (or even BBC 2) would bring – partly in terms of viewing figures, but also in terms of the general weight of expectation.  As it turned out, it was a very smart decision – not only did it get a BBC 2 repeat before the end of its BBC 4 run, but also the fact that we were on a lower-profile channel meant that we enjoyed far more creative freedom than we might have done.  I'm sure the fact that Jack was a big name also helped, but we had virtually no interference from above.

To give one example, when the director of the pilot was unavailable to do the series, we really wanted our producer Alex Hardcastle to direct it.  Although he had directed his own short films and had ambitions to be a director, Alex had never directed a TV show before.  I very much doubt that we'd have been allowed to take a chance on him if it was for BBC 1 or and BBC 2, but as it was, we got our way.  Suffice it to say that Alex is now out in America, directing some of their top shows including Parks and Recreation and the U.S. version of The Office!

So, how was it working with ‘the star of the show’?
As far as the writing process was concerned, it was an equal collaboration between Jack and myself.  Considering he was the star and the creator of the show, Jack displayed an amazing lack of ego throughout.  He would never overrule me on the grounds that it was 'his' show.  And always mindful of the character traits of Rick Spleen, he would often say “That's too funny a line for Rick, we'll have to give it to one of the other characters.”

One key difference in the writing process compared to my previous sitcoms was that, whereas Trevelyan and I would always write the first draft of the script together, Jack and I adopted a different approach.   We would work on the story lines for an episode together, right up to the point where we had a detailed scene-by-scene breakdown, complete with some of the gags and key lines of dialogue, but at that point Jack would then go off and write a first draft of the scenes, which I would then read and make notes on.

Sometimes I would have to grudgingly admit that Jack's first draft was almost word-perfect – and sometimes I would gleefully be able to report that I thought it needed a lot more work!  Sometimes we had to go back to the drawing board, as the process of trying to write a first draft served to identify that there was actually something wrong with our scene-by-scene breakdown.  But crucially it meant that we didn't sit there endlessly debating which one of the characters should speak first or rewriting the opening sentence twenty times before we moved on to the second one.

So that was how we arrived at a first draft of each script.  Jack would go off and write two or three scenes at a time, then once I'd read them and made my notes, we'd meet up and rewrite them together.  Once we were happy with them, he'd go off and do a first draft of the next couple of scenes.  Different writers may find that different ways work for them – but that's a process I definitely wish I'd discovered when I first started co-writing sitcoms.

So what did you do with the first draft?
Once it was finished, we'd show it to Alex, take his notes on board, and then Jack and I would write a second and third draft together.  At that point, we'd rehearse the scripts with the cast, who – especially as time went on – came to know their characters well enough to be able to challenge us if there was anything that didn't ring true!  By the time we came to shoot the scripts, they were pretty much polished and ready to go.

Lead Balloon is without doubt the thing I'm most proud of to date in my writing career.  But of course, as a writer, I can still find things to gripe about!  For a start, one of my favourite episodes, a two-hander with Jack being held as a hostage by Robbie Coltrane, attracted 1.6 million viewers on first showing – a pretty healthy figure for BBC 2 at 10.00 pm – and yet it's never been repeated.  And as far as I'm aware, the BBC wouldn't even have to pay anything to show it again.  (The schedulers do read your blog, right...?)

One last thing, I recently blogged about Writer-Performer sitcoms. Do you worry that non-performing writers are in danger of being overlooked? Are you a bit gloomy about getting another of your own sitcom on TV, do does that not bother you?

I read your blog and I thought there was a great deal of truth in it.  Although, having said that, I then read Dave Cohen's blog disagreeing with you, and I found myself agreeing with a lot of the points in that!  I must admit, I never really saw myself as Nick Clegg...

I suppose in a way I have a foot in both camps – in the aftermath of Lead Balloon, I've written scripts with Jack Dee, Mark Steel and Nina Conti, so technically, they count as writer/writer-performer sitcoms!  (Although actually, the Mark Steel one isn't a sitcom.)  I've also had my own solo script commissioned.  As to what lessons I can draw from any of that, the only thing that all four projects have in common is that, so far, they've yet to make it to TV!

I do think that non-performing writers are more easily overlooked, and if I'm honest I would have hoped that co-writing four series of a hit sitcom like Lead Balloon would have opened more doors for me.  But I think these are difficult times.  Money is tight and broadcasters are understandably reluctant to spend money piloting things unless they're pretty sure of them.  And I can see why trusting an up-and-coming comedian with a proven fan base is an attractive option when it comes to commissioning a new sitcom.

But I remain optimistic that one or more of my current projects will see the light of day.  And, if not, I've already got another three or four ideas in the pipeline.  If there any qualities I've developed over the years, they are persistence, patience – and a third, funnier thing that begins with 'p'.  I'll have to get back to you on that...

Pete, we've taken up more than enough of your time. Thank you so much for baring your soul and sharing your experience and insights.
Posted by James Cary at 12:24